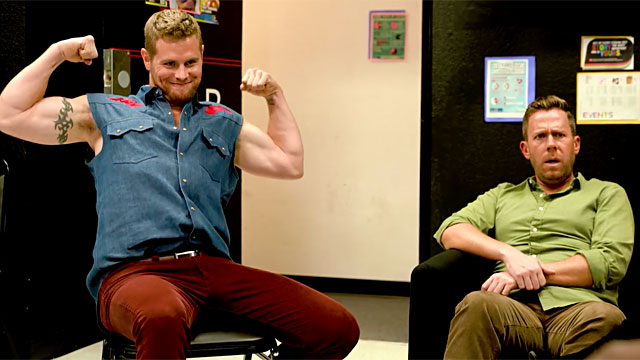 Artie O’Daly is back with the latest installment of his Bad Boy web series.

The episode opens on Scott (O’Daly) at the LGBT Center where he’s in session with his counselor Jamila (Julia Pace). Scott is frustrated his agent isn’t happy with the state of his most current movie script.

“Do we please others or do we please ourselves?,” asks Jamila before offering some homespun advice. “I’m going to tell you something my mama told me: if you’re eating dinner and a friend stops by don’t share too much of your food. Uh-uh, cause then you’ll end up ordering pizza and that’ll take 30 minutes to get there.”

Yeah, it didn’t make sense to Scott either.

Before a real solution for Scott’s problem can be found, ‘bad boy’ BJ (Braden Davis) wanders in. It seems he always accompanies his mother to her AA meetings because “she’s usually too drunk to drive home after.”

And since this is a group thing (psst – it isn’t) he has a problem he’d like to share. 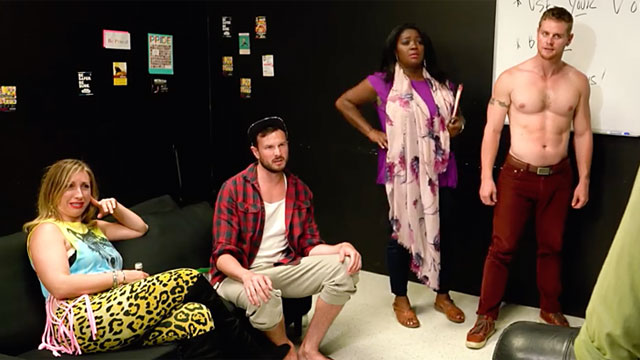 It seems his uncle tragically died last week on his farm where he sneezed right before going peacefully. Or, ‘piece-fully’ since the sneeze caused him to lose his balance and accidentally fall into the wood chipper.

You know how that happens…

Jamila has some sage advice from her mama on this one too: “Sometimes a door opens up and you can walk on through it, or you can stay where you are cause you’re going to be fine either way.”

Mama had a way with words, don’t you know?

But we can’t ruminate too long on that one because that AA meeting is over, so BJ’s mom Whitney (Theresa Ryan) joins the fun. And – surprise – she has a problem, too.

She was apparently squatting in an empty house until ‘these people moved in,’ and now she’s having to hide/sleep in their closet.

And before Jamila can solve that quandary, beefcake ‘bad boy’ Jim (Drew Canan) finds the fun. It seems he was having an HIV test because he likes to be sexually responsible.

Wait – was that something that actually made sense??? 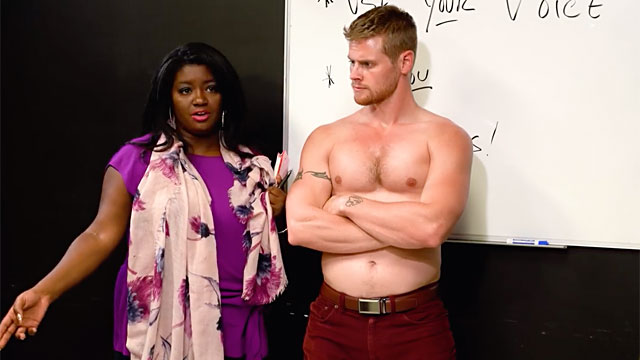 Jim is still coping with the aforementioned tragic wood chipper death of his dad, but taking it well.

“He’s on to greener pastures now, at least that’s where I heard they found him,” shares Jim.

Not to give too much away, but like everyone we meet in O’Daly’s wacky ‘Bad Boy’ universe, you can’t trust that anyone is exactly who they seem to be.

Hit play to see how the ‘session’ comes to a close.