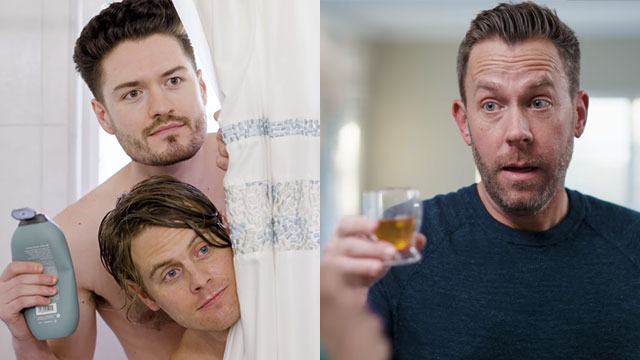 In this episode, Calista decides to lower Scott’s defenses during an interrogation by plying him with shots of whiskey. Clever, yes?

Except…Calista just might be a lightweight when it comes to drinking.

Plus, there’s the added distraction of bad boys “Jim” (Drew Canan) and “James” (Alex Dyon) who show up for a frolic in Daddy Scott’s shower.

As the whiskey keeps pouring, facts about the murder mystery (or is it a murder?) unfold. Although some points have to be confirmed via trips to the shower where the bad boys are in danger of running out of body wash.

After Scott accuses James of being the real murderer, James explains (from the shower) that he’s known for his “smolder” not “murder.” Which Jim confirms (also from the shower): “He’s more the kind of guy who has sex with his friends.”

That clears that up.

More shots, more questions, more smoldering, more references to Calista looking like she wandered off of the set of “Designing Women,” and…more shots make ‘Bad Drunk Boy’ one of the installments of the web series yet.

If that sounds like it makes no sense, that’s the beauty of the whole thing. O’Daly’s quick witted, farcical dialogue ricochets off every character like clockwork…only at double speed. But if you keep up, you pick up even more clues as to where this is all headed.

Make sure you stick around for the outtakes as well as the sassy end credit graphics by Charlie Branigan which tie into the story.