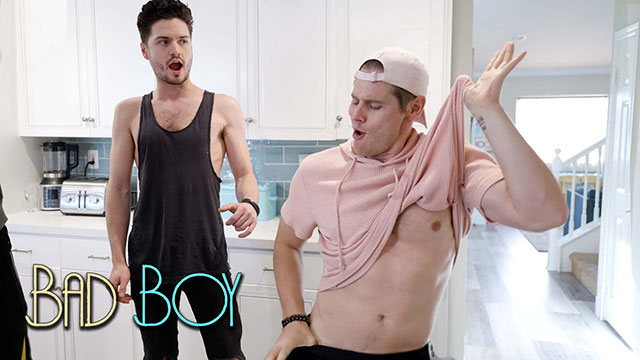 The latest episode of the popular ‘Bad Boy’ web series starts with a fake cop who loses her horse and ends up leaving a certain ‘bad boy’ exposed.

The hijinks begin as Scott (series creator Artie O’Daly) is running late for a very important Hollywood meeting. But before he can start his car a “police officer” (Alina Bock) is knocking on his window asking for license and registration.

Suddenly, ‘bad boy’ Jim (Drew Canan) shows up with safety concerns for ‘Daddy Scott’ as there’s an insane killer reportedly on the loose with their sights on Scott.

But the homicidal maniac threat keeps getting pushed aside for other issues like a video of Scott and Jim making out (Jim calls for a reshoot), along with talent agent Roderick (Paul Riley Fox) handcuffed to BJ thanks to a “sex thing gone wrong.”

You might think the murderer would be the top concern here but somehow Scott and the officer, revealed to be FBI agent ‘Calista Flockhart’ (the other one), get waylaid into judging a “rap battle” between Jim and BJ.

Yes, it all sounds insane which just makes it more fun to keep up. You’ve got Jim’s adorable density factor, James’s ever-smoldering intensity, BJ’s self-concerned victimhood, and Calista who wants to focus on the murder mystery, but can’t.

Amping up the fun factor is O’Daly’s gift for over-the-top dialogue like BJ calling Jim an “idiot slab of beef” cousin, or Scott telling the boys to “untuck in the Interior Delusions lounge.”

We won’t give anything away so you’ll have to watch below to find out who wins the rap battle, or if the murderer shows up, or if Calista’s horse is ever found.

You can find my previous coverage of the ‘Bad Boy’ web series here, and you can follow Artie O’Daly and crew on his Instagram here.