A group of armed Proud Boys showed up at a public library in Sparks, Nevada, to protest a family Pride event.

Standing outside the Sparks Library, the Proud Boys reportedly yelled “Shame on you for bringing your children to this.” Another called one of the parents “sick” as they entered the library.

One of the librarians spoke to KRNV, the local NBC News affiliate, but anonymously as she was fearful of retaliation by the anti-LGBTQ Proud Boys.

She told KRNV she called the Sparks Police Department four times during the event. A statement from the Sparks PD acknowledged responding twice.

Around 11:30am, police were called regarding a possible assault. But the victim, identified as Washoe County Libraries Director Jeff Scott, declined to press charges.

Two hours later, the police returned after being notified one of the protestors was seen carrying a rifle outside the library building.

It’s important to note that the recent mass shooting at Uvalde Elementary School in Texas is still fresh in people’s mind. So the fear factor was palpable.

“We had some people who were visibly shaken and sobbing,” the librarian told KRNV. “We brought everybody in the building and got them out of vision out of sight.”

According to a police statement, the armed gunman had departed the scene before police officers arrived. 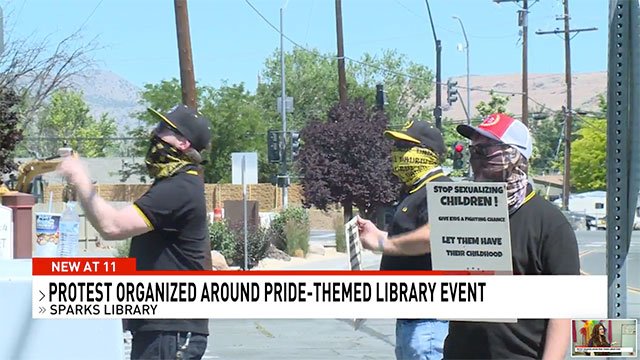 The librarian told KRNV she hoped police officers would’ve done more to make the parents and children feel safe as they arrived and departed the event.

“When you have a situation where it’s potentially volatile and weapon appears — simply a presence, indicating that there are police nearby, would have been reassuring to the families.”

Sparks PD confirmed to KRNV that the police officers who showed up at the library did not engage with the crowd at any point during the protest.

In a statement to KRNV, Sparks Police spokesperson Sgt. Nicholas Chambers offered this explanation as to why officers did not act against a man terrorizing a group of children with a gun. In spite of the tension in the air, the library called the event a success. A tweet from the Washoe County Library system read:

“DragQueenStoryTime was a success! Sparks families came out today to meet Miss Ginger and join in the fun. Special thanks to Austin from @SenCortezMasto’s office for presenting Ginger with a very special proclamation! What an honor on this fabulous day!”

#DragQueenStoryTime was a success! Sparks families came out today to meet Miss Ginger and join in the fun. Special thanks to Austin from @SenCortezMasto’s office for presenting Ginger with a very special proclamation! What an honor on this fabulous day! 🌈📚 pic.twitter.com/XE0eA3ImJm

The first year, the event drew one lone protester and about 50 counter-protesters who supported the event.