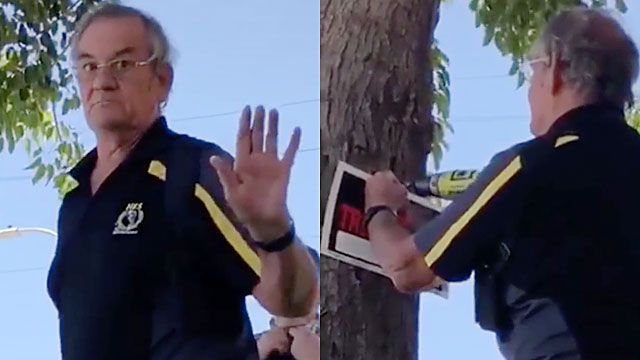 A young woman sits down under a sheltering tree on the lawn of a church in North Hollywood, California.

Because churches are welcoming and all that…right?

Apparently not so much if you happen to be a young Black woman.

In the video, an elderly woman records the incident as a gentleman (who we’ll refer to as ‘Handyman Joe’ for this little post) is hanging a ‘No Trespassing’ sign on a tree.

Please note he’s hanging it on the side of the tree NOT facing the street or sidewalk.

“Did you go buy that just for me?” asks Alex.

“Just for you,” replies Handyman Joe. “You know, we used to be real nice about it.”

“You could still choose to be nice about it – you’re choosing not to be,” Alex points out.

As he drills a hole in the side of the tree, Alex asks, “So, this is a precursor to you calling the cops?”

Just for clarity, Alex inquires, “So you’re willing to call the cops on someone sitting on the grass when there are clear crimes they could be taking care of?”

Suddenly, out of nowhere, the issue of race comes up as Handyman Joe turns to declare, “All lives matter.”

Even Joe’s assistant is a bit shook over the random remark.

@thaddeusshaferTomorrow I’ll try to hang out there as a white person minding my own business like Alex did and see what happens. Stay tuned.♬ Ride It – Regard

Out of respect for folks at the church who may not know this foolishness occurred, I won’t type the name here. However, I literally lived just down the street from this church when I first moved to Los Angeles.

Over on reddit, folks found the situation to be pretty over-the-top ridiculous.

“Let’s drill a hole into our tree so we can install a no trespassing sign facing the building.”

“It was 100 percent targeting her specifically because it’s facing away from the street.”

“Unprompted, he blurted out ‘ALL lives matter!’ confirming that race was forefront in his mind. I’ll bet he’s been watching the demonstrations and riots and raging at his TV, and has been itching for an opportunity to confront one of those people.”

“One might think all Christians would embrace anyone chilling out on the church lawn and see it as chance to make a heart-felt connection to someone from the world community.”

What are your thoughts, readers? Was this a racist action? Do you think a white person would have been received in the same manner?