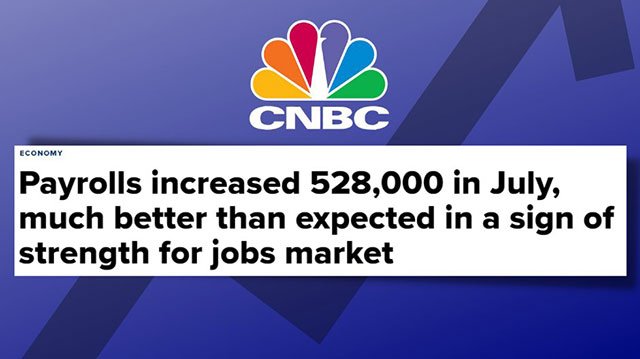 Republicans must truly be sour this morning as the July jobs report far exceeded expectations with the U.S. economy adding 528,000 jobs and the unemployment rate ticked down to 3.5 percent.

The impressive performance — which brings total employment back to its level of February 2020, just before the pandemic lockdowns — provides new evidence that the United States has not entered a recession.

Mr. Biden celebrated the report on Friday morning. “Today, the unemployment rate matches the lowest it’s been in more than 50 years: 3.5 percent,” he said in a statement. “More people are working than at any point in American history.”

Wage growth also surged higher, as average hourly earnings jumped 0.5% for the month and 5.2% from the same time a year ago.

The stock market dipped following the report with Dow Jones Industrial Average down 128 points in early trading as traders anticipate a strong counter move from a Federal Reserve looking to cool the economy and in particular a heated labor market.

He added: “There’s more work to do, but today’s jobs report shows we are making significant progress for working families.”

More people are working than at any point in American history. That’s no accident, it’s results.

When we pass the Inflation Reduction Act, working families will get rebates to buy efficient appliances and weatherize their homes. And folks will have tax credits for efficient heating and cooling and rooftop solar.

Families will see their energy bills drop by the hundreds.