The U.S. House passed legislation on Wednesday night that would aid state and local governments set up a warning system for active shooter situations similar to the Amber alert systems set in play when a child is abducted.

The bill would also enhance law enforcement’s communication with the public during mass shooting incidents.

The legislation, approved by a vote of 260-169, was originally introduced in February, gained new urgency following the deadly mass shootings in Buffalo, New York; Uvalde, Texas; and Highland Park, Illinois. In the wake of those massacres, Congress last month approved a package of gun-safety measures that comprised the most significant firearms regulations in three decades.

The bill was endorsed by numerous law enforcement organizations, including the Fraternal Order of Police and National Sheriffs’ Association. But many Republicans considered it an encroachment on the rights of gun owners and opposed it.

“This bill is about Democrat fear mongering that guns are an ever-present threat, and we cannot be safe until big government rounds up every last one of them,” Ohio Representative Jim Jordan said during debate. 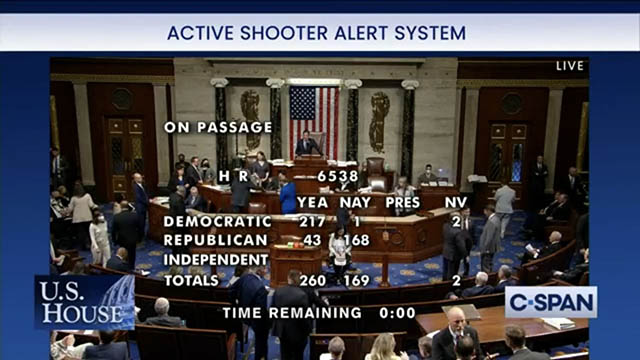 The bill has nothing to do with taking guns away from anyone. It’s about improving communication during a mass shooting.

Wisconsin U.S. Rep. Ron Kind was the only Democrat to vote against the Active Shooter Alert Act Wednesday evening.