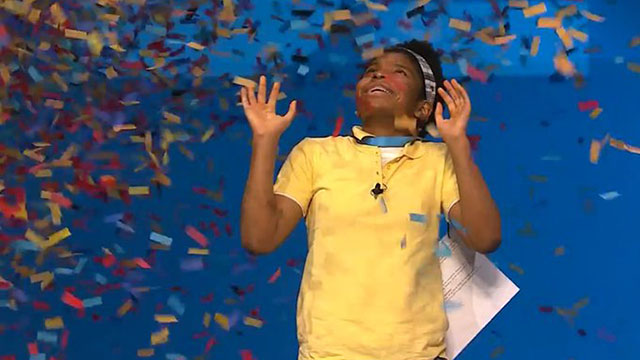 The 14-year-old from New Orleans is also the first winner of the competition from Lousiana. First Lady Dr. Jill Biden was in the house to cheer the finalists on.

Avant-garde spelled “murraya” correctly to win the competition, after conquering words such as “retene,” “ancistroid” and “depreter” over multiple rounds. Upon her win, Avant-garde, who is also a talented basketball player with three Guinness World Records in dribbling, jumped up and down and let out an excited shout as confetti rained down on the stage.

The teen said Friday that “it felt really good to be a winner” after she had been practicing for two years. Avant-garde, who had finished tied for 370th place in the 2019 competition, credited the win to her tutors and “a bit of luck.” She told ABC’s “Good Morning America” that she hopes her historic win will inspire other young Black people in the United States to excel at spelling.

Chaitra Thummala, a 12-year-old from San Francisco, and Bhavana Madini, a 13-year-old from New York City, came in second and third place, respectively. Jody-Anne Maxwell of Jamaica, who won the bee in 1998, was the competition’s first Black champion.