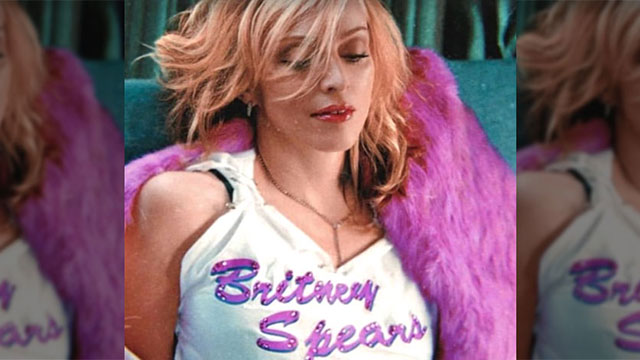 Joining the #FreeBritney movement, Madonna speaks out for Britney Spears and her ongoing battle to end her conservatorship.

Last month, the Queen of Pop dropped a one hashtag remark – #diditfirst – about Lil Nas X’s scintillating BET Awards performance (complete with male-on-male lip-lock) referencing her own same-sex smooch with Spears at the 2003 MTV Video Music Awards that became its own pop culture moment.

But some folks got a bit twisted that Madge didn’t take the time to make a statement of support for Spears and her current situation.

Well, now she has.

In her Instagram Stories last night, Madonna – wearing a Britney Spears t-shirt – penned a passionate plea demanding, “Give this woman her life back – Slavery was abolished so long ago!”

“Death to the greedy patriarchy that has been doing this to women for centuries,” Madonna added. “This is a violation of human rights!”

She closed the missive telling Spears, “Britney we coming to get you out of jail!”

Madonna is just the latest in a cavalcade of stars speaking out in support of Spears. Previous celebs raising their voices for Britney include Mariah Carey, Christina Aguilera, Cher, former boyfriend Justin Timberlake and more.

Britney’s situation made headlines last month when a judge denied her request to remove her father as the conservator of her estate, according to NBC News.

Under the current terms of the conservatorship, Spears has alleged that she has been overworked without breaks, is forced to use birth control to prevent her from having more children, and is being medicated with lithium. The 39-year-old says all of those decisions were made by her father, Jamie Spears.

Her father denies the allegations and has said he only has his daughter’s “best interests at heart.”

In related Madonna news, the pop star recently told her fans the film of her ‘Madame X’ tour will be released on Paramount+ in October.