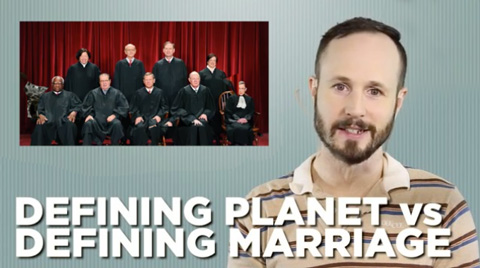 Matt Baume, who has a knack for breaking down why things work they way they do, drops this short video explaining why the Supreme Court became the final answer on marriage equality.

Where does the Supreme Court get off deciding the definition of marriage? Well, it is kind of their job.

Look at it this way: Remember a few years ago when Pluto stopped being a regular planet and became a trans-Neptunian dwarf? That happened because astronomy experts decided there should be a change in the definition of “planet.” In the same way, the Supreme Court decided what the Constitution requires from the definition of “marriage.”