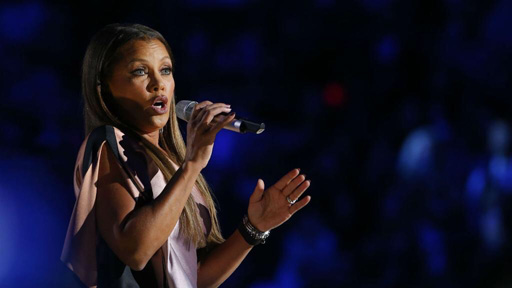 Vanessa Williams, the first black Miss America in history, returned to the pageant for the first time in 32 years tonight as Head Judge, as the organization formally apologized to Williams and her mother, Helen, for the way the pageant handled the end of her reign in 1984 over a nude photo scandal.

Sam Haskell apologized to Williams during Sunday night’s nationally televised Miss America pageant for the way his predecessors handled the controversy involving nude photos of Williams that were published in Penthouse several months after she became the first African-America Miss America.

Williams, who returned to the pageant for the first time in 32 years as head judge, resigned the title in 1984.

Haskell, who was not involved with the pageant at the time, said, “I want to apologize for anything that was said or done” during the photo scandal.

“You have lived your life in grace and dignity and never was it more evident than during the events of 1984 when you resigned. Though none of us currently in the organization were involved then, on behalf of today’s organization, I want to apologize to you and to your mother, Miss Helen Williams,” he announced onstage. “I want to apologize for anything that was said or done that made you feel any less than the Miss America you are and the Miss America you always will be.”

Williams, who went on to become a famous stage and TV actress, says she “did the best I could” during the scandal.

Vanessa was all of 21 years old when the scandal broke. She was 18 I believe when she made the mistake that made such a huge impact on her life.


Since then Vanessa has racked up tons of award nominations for Tony Award, Grammy Awards, Emmy Awards and more.

I have not watched the Miss America pageant again until tonight, as I’ve held a grudge that the organization dropped her so quickly.

At the time, I felt it was un-American that the organization moved to distance itself from her so quickly.

It was gratifying to see Helen, her brother Chris and long-time associate Brian Edwards in the audience to take in the moment.