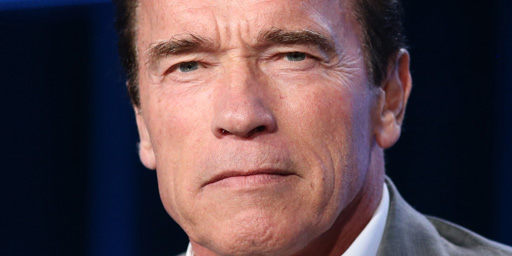 According to the Hollywood Reporter, action movie star and former governor of California, Arnold Schwarzenegger will replace Donald Trump as the host of the NBC reality show Celebrity Apprentice.

NBC severed all ties with Trump in July after he made what NBC deemed to be “derogatory statements” about Mexican immigrants. In a June 16 speech, he referred to Mexican immigrants as “rapists” and as people bringing drugs and crime into the U.S. in a speech announcing his presidential campaign.

Schwarzenegger joins Celebrity Apprentice for the upcoming 15th season of the franchise. “I have always been a huge fan of The Celebrity Apprentice and the way it showcases the challenges and triumphs of business and teamwork,” he said in a statement. “I am thrilled to bring my experience to the boardroom and to continue to raise millions for charity. Let’s get started!”

Since leaving office in 2011, Schwarzenegger has recently appeared in Terminator Genisys and The Expendables films. On the small screen, his credits include the series finale of Two and a Half Men and the Showtime docuseries Years of Living Dangerously, which he produced. Additionally, Schwarzenegger was one of the early investors in the Planet Hollywood restaurant chain.

“After leaving the show to run for political office, Donald made it clear that he wanted The Celebrity Apprentice to be able to continue to raise millions of dollars annually for worthy causes, and now NBC and I have found an amazing new leader to do just that,” said executive producer Mark Burnett in a statement. “Gov. Schwarzenegger will use his vast and highly successful business, political and media experience to drive this hit franchise to new heights.”

The Donald tweeted his congratulations soon after the announcement:

Congrats to my friend @Schwarzenegger who is doing next season’s Celebrity Apprentice. He'll be great & will raise lots of $ for charity.— Donald J. Trump (@realDonaldTrump) September 14, 2015