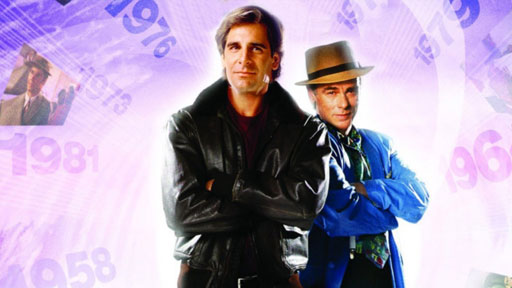 Super-smart guy Matt Baume’s latest installment of ‘Culture Cruise’ breaks down a 1992 episode of the NBC series, Quantum Leap, which explored the early gay movement in 1964 at a military academy.

As you may recall, the series (which aired from 1989-1993) starred hunky Scott Bakula as “Dr. Sam Beckett,” a scientist who travels through time tasked with having to ‘set right what once went wrong.’ His co-star was a hologram of his friend “Al” played by Dean Stockwell.

That may sound kind of weird today, but it was a hit in its day.

Baume shares how the episode integrated a lot of accurate historical details of the early gay rights movement from a time when such a thing barely existed.

In the episode titled, “Running For Honor,” Sam leaps into the persona of Tommy, a mid-western military cadet. As in every installment, Sam’s first challenge is to figure out why he’s even there.

It turns out there have been violent attacks around the military academy targeting young men suspected of being gay.

The tie-in here is that when the episode aired in 1992, the country was gradually becoming more comfortable talking about gay-related issues.

After a decade of HIV/AIDS headlines, and the deaths of 150,000 Americans, the importance of coming out and visibility was becoming more and more clear.

The topic of ‘gays in the military’ was making headlines as presidential candidate Bill Clinton promised to overturn the ban on open service by gays and lesbians, and Republicans were fiercely opposed to that idea.

This all led to the hideous compromise that became ‘Don’t Ask, Don’t Tell.’

The episode also highlights the use of ‘underground newspapers’ which were the precursors to publications like The Advocate, and even includes a scene about ‘outing’ fellow students in the name of the gay movement.

In the end, Sam has to stop the hate crime murder of a gay ex-cadet and, in doing so, proves the foolishness of banning gays in the military.

Baume does a great job of highlighting the effort the writers took to weave in true historic details, including the Stonewall riots. And he does so without sounding like a boring history lecture.

Check out Baume and his ‘Culture Cruise’ below, and you can find more of his videos on YouTube here.