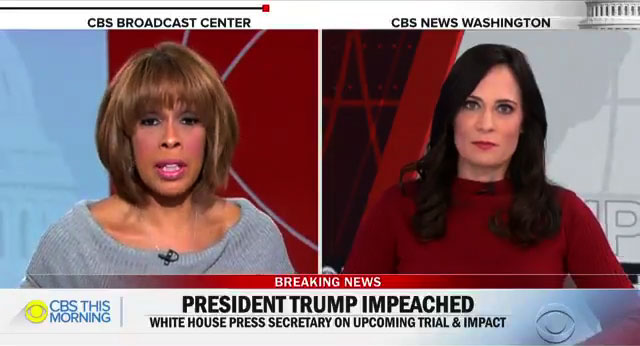 During an appearance on CBS This Morning, White House press secretary Stephanie Grisham attempted to defend Donald Trump’s grotesque insinuation that deceased Rep. John Dingell might be “looking up” from hell.

The comment occurred during a rally in Michigan, where Dingell represented his district for more than 50 years – making him the longest-serving congressman in U.S. history.

Trump was ranting about the congressman’s widow, Rep. Debbie Dingell (D-MI), who voted in favor of his impeachment last night.

When asked about the remark by host Gayle King, Grisham said she “didn’t hear him say that” but characterized the comment as “riffing” and “counterpunching.”