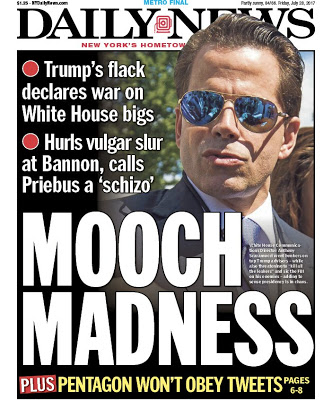 Unsurprisingly, new White House Communications Director, Anthony Scaramucci, lands on the cover of the New York Daily News this morning as folks are still talking about his expletive-laden rant to a reporter about White House Chief of Staff, Reince Priebus.

The Mooch is on the loose — and President Trump’s new attack dog is one angry, angry pooch.

“Reince is a f—ing paranoid schizophrenic, a paranoiac,” Scaramucci said in a Wednesday night phone call to Ryan Lizza, a writer for The New Yorker.

Scaramucci channeled Priebus as he railed on the phone: “‘Oh, Bill Shine is coming in. Let me leak the f—ing thing and see if I can c–k-block these people the way I c–k-blocked Scaramucci for six months.’”

Later in the call, after he promised to fire three to four people “by tomorrow,” the former Wall Street hedge fund titan unleashed his below-the-belt venom on White House strategist Stephen Bannon.

“I’m not Steve Bannon,” Scaramucci said after insisting he had no interest in media attention.