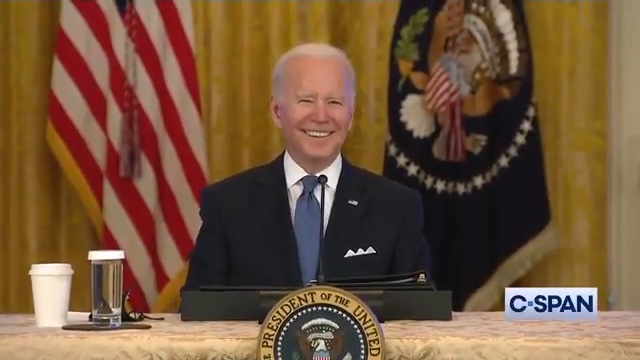 After reporters had been allowed access to watch a portion of a meeting between President Biden and his Competition Council today, Fox News’ Peter Doocy yelled a final question to Biden as the journalists were being ushered out.

“Do you think inflation is a political liability ahead of the midterms?” Doocy asked.

Biden responded, with a touch of sarcasm, “No, it’s a great asset. More inflation. What a stupid son of a bitch.”

And the Twitterverse cheered.

Peter Doocy has a history of asking really dumb questions in the White House press room.

Of course, Republicans – who spent years wetting themselves over the former guy’s crass public statements like mocking a disabled reporter – clutched their pearls over Biden’s remark.

Fox News’ Peter Doocy: "Do you think inflation is a political liability ahead of the midterms?"

President Biden: "No. It’s a great asset. More inflation. What a stupid son of a bitch”

A lot of laughter as well. pic.twitter.com/aErBj3cvkx

Everyone is happy that President Biden said it like it is.

I’m old enough to remember when Republicans thought Trump’s endless river of vulgarity and cruelty was genuine and charmingly transgressive.

Those same Republicans are pearl-clutching and swooning over Biden accurately calling a dumb son-of-a-bitch just that.

McCain had the exact same reaction to Peter Doocy as Biden.

At this point Peter Doocy’s been owned so many damn times they gonna start callin’ him a 1992 Honda Accord.

I’m seeing more outrage from Republicans about President Biden’s comments toward Peter Doocy than the insurrection on January 6th.

Look…before we go down an endless cycle of pearl clutching and calls for civility, can we just be honest that everyone wins here? Biden gets to vent. Democrats get to laugh. Doocy gets endless amounts of air time playing the victim. No one apologize. Just laugh and move on.