Tyler Dinsmoor, 27, of Oak Harbor, was arrested without incident Friday after expressing his desire to kill members of the LGBTQ community on social media, according to the Oak Harbor Police Department and court documents.

According to court documents, Dinsmoor shouted, “It used to be legal to kill gay people!” https://t.co/FTIQaM3rnv

According to court documents, Dinsmoor posted on social media that he “might not make it through this fag month,” and he “was 9mm away from fedposting two faggots at home depot yesterday.”

‘Fedposting’ is Internet slang for anything posted online that shows a premeditated planning of criminal activity.

According to the warrant issued in the case, Dinsmoor started focusing on the Anacortes Pride Parade that is scheduled to be held on June 18 and was asking people to “talk me out of it.”

At about 3 p.m. on June 14, Island County dispatch received a report of threats made by Dinsmoor.

The woman said she’s a neighbor to a rental property that Dinsmoor owns, and Dinsmoor had been coming over to fix the property after a previous tenant.

She said she had recently returned from a trip to the grocery store with her wife, and as they were walking inside with their groceries, Dinsmoor shouted, “It used to be legal to kill gay people!” 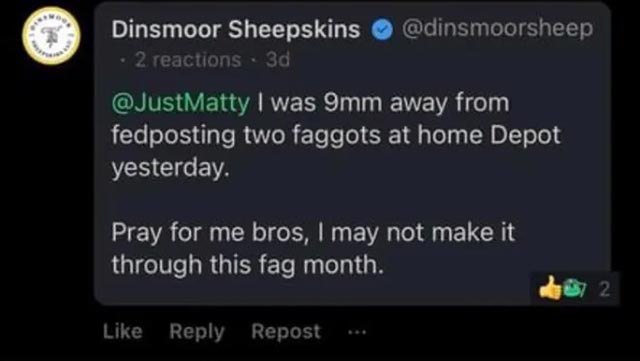 According to the Oak Harbor Police Department, they had been sent emails with the concerning screenshots.

Also on May 2, the @dinsmoorsheepskins account posted a Photoshopped picture of a white man pointing a handgun at a group of people waving and holding a Pride flag.

On May 22, @dinsmoorsheepskins account posted, “I am Tyler and the Jews are responsible for just about every bad thing in this world, they are agents of Satan and deserve severe punishment for their nefarious deeds. They will go to hell. All homosexuals are child-rapists in wait, and all (every single one) should be put to death immediately. They will go to hell. Adulterers should be put to death, with no exceptions. White people are not responsible for the bad behavior of blacks, and the best case scenario is that we live separately, in our own nations. There is nothing more useless that a ‘career woman’ – it’s an abomination.”

A felony warrant was issued for Dinsmoor for civil rights malicious harassment with a hate crimes enhancement. The felony warrant said he presented “an extreme risk of actual violence in the near future.”

Dinsmoor was arrested without incident and bail was set at $1,000,000.

He has so far raised over $18,000 on the Christian crowdfunding site GiveSendGo.

We've received reports community reports that Dinsmoor, a Christian fundamentalist fascist, has been fantasizing online about killing gay ppl & insinuating that he plans to go to Pride at Anacortes on June 18 pic.twitter.com/4KkrN8uo1E

Just guess what church this guy belongs to. Go ahead. (@hemantmehta)