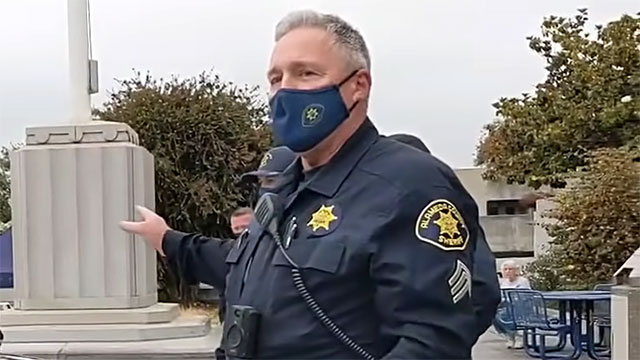 When James Burch and several activists began filming a sheriff’s deputy during a confrontation on the Alameda County courthouse steps in Oakland, Calif., this week, the officer caught the group by surprise. He pulled out his phone and started blaring Taylor Swift’s 2014 hit single “Blank Space.”

Confused, Burch asked: “Are we having a dance party?”

After he and the other activists pressed the officer about what he was doing, the deputy — identified by local media as Sgt. David Shelby — said, “You can record all you want, I just know it can’t be posted on YouTube.”

He was referring to YouTube’s automated copyright system, which detects and removes unauthorized protected material — such as a popular song — from being uploaded to the Internet.

Things didn’t quite go according to the officer’s plan as the clip has amassed over more than 848,000 views on Twitter at this writing. Plus, a version did indeed make its way to YouTube that has garnered more than 573,000 views so far.

I saw the original tweet when it happened and wondered, “What is it the officer didn’t want recorded?” He didn’t seem to be doing anything wrong, so…why the digital confrontation? He made himself look shady when it’s not clear he was. #fail

“The officer was trying to be a little smart, and it kind of backfired,” Sgt. Ray Kelly, a spokesman for the Alameda County sheriff’s office, told the Washington Post. “Instead of censoring it, it made it go viral.”

According to Kelly, Shelby still works for the sheriff’s department but the issue has been referred to internal affairs for review.

While there’s no policy prohibiting an officer from doing what Shelby did in the video, “there is a code of conduct on how we should carry ourselves in public,” Kelly said. The spokesman added that the sheriff’s office does not “condone” the deputy’s behavior.

“This is not a good look for law enforcement,” Kelly said. There is a “serious lesson learned here.”