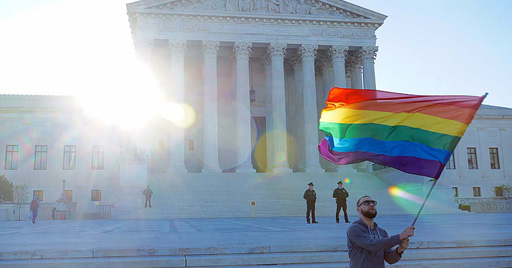 Bloomberg is reporting that the U.S. Supreme Court has refused to review a Mississippi “religious freedom” law, HB1523, that allows broad discrimination against LGBT people.

In denying the request for review, SCOTUS is allowing the law to remain intact.

The justices turned away two appeals by state residents and organizations that contended the measure violates the Constitution. A federal appeals court said the opponents hadn’t suffered any injury that would let them press their claims in court.

The Mississippi fight in some ways represented the flip side of a Colorado case the high court is currently considering; the question in that instance is whether the state can require a baker who sells wedding cakes to make one for a same-sex couple’s wedding.

The cases are testing states’ ability to regulate what happens when LGBT rights come into conflict with religious freedoms. Colorado is aiming to bolster gay rights by enforcing an anti-discrimination law, even though the Denver-area baker says he has a religious objection to same-sex marriage.

The Mississippi law, by contrast, gives priority to religious rights. The state enacted its law less than a year after the 2015 Supreme Court ruling that legalized same-sex marriage nationwide.

The measure says religious people can’t be sued or penalized by the government for declining to provide services for same-sex marriage ceremonies. The law also protects people who believe gender is an immutable characteristic or who object to sex out of wedlock.

The 2016 law was passed after the U.S. Supreme Court issued the landmark Obergefell ruling which legalized same-sex marriage nationwide.

I am still very optimistic that any applications of this law to harm #LGBT people will be struck down. #HB1523 https://t.co/5C7hrEkU7J

Disappointed to hear @Scotus declined to review this patently unconstitutional #LicensetoDiscriminate law. Other challenges to #HB1523 are ongoing and we will win this fight. https://t.co/8GSiJIe2FC— Trans Equality (@TransEquality) January 8, 2018

We are disappointed that SCOTUS declined to hear @LambdaLegal’s case against #HB1523, but the fight to strike down this harmful anti-#LGBT law is not over. https://t.co/citjKe0pFS— ADL (@ADL_National) January 8, 2018