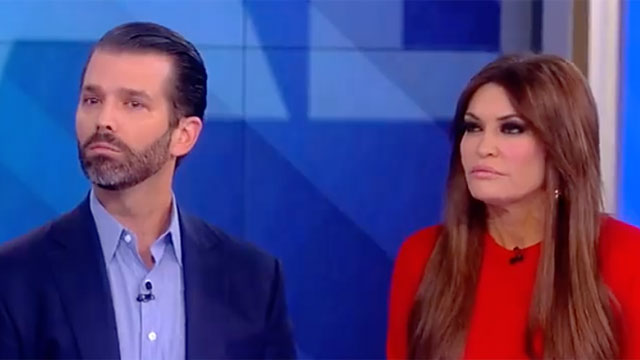 The student body president of the University of Florida is facing possible impeachment for inviting Donald Trump Jr. and his girlfriend Kimberly Guilfoyle to the campus for speeches on October 10.

Junior and Guilfoyle, a Trump campaign adviser, were reportedly paid a $50,000 fee for the appearance funded via student activity fees.

According to the Tampa Bay Times, the law says public funds cannot be used to support political campaigns.

Student body president Michael C. Murphy received a formal resolution for his impeachment Tuesday afternoon, which was signed by more than 100 students and alumni.

This is only the second time in the university’s 115-year history a student body president has faced impeachment.

The university’s student newspaper The Alligator reports that Murphy’s father, Dan Murphy, is a pro-Trump lobbyist in Washington, D.C. who has maxed out donations to Trump’s re-election campaign and has been photographed speaking to Trump Jr. in Washington.

Michael Murphy didn’t answer questions related to his father’s involvement with the Trump campaign, nor with Trump Jr. He said there is “no conflict of interest.”