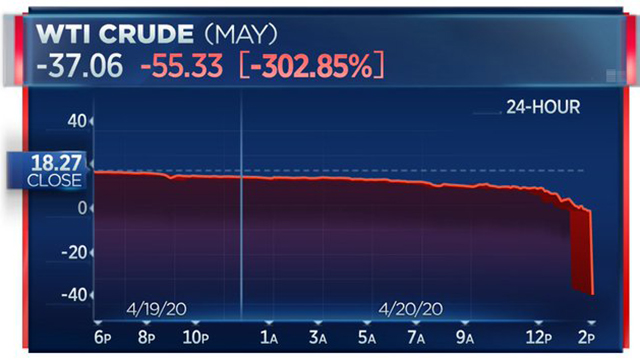 How it works: Several other layers of costs, including refinement, transportation and various state taxes suggest negative gasoline prices are extremely unlikely, per Patrick De Haan, head of petroleum analysis at GasBuddy.

The big picture: The coronavirus-fueled lockdowns around the world are choking off oil demand, throwing the oil industry — which was already oversupplied before the pandemic — into historic chaos.

An equally historic production cut of the world’s biggest producers likely delayed the drop in oil prices we’re seeing today — and made it a tiny bit less worse.

Prices are likely to keep dropping, or at the very least remain very low, for the next few weeks at least given there is simply not enough places to store all of the extra oil sloshing around the world as many of us stay at home.

Under the terms of an arrangement brokered by Trump, Saudi Arabia, Russia and other countries will cut 9.7 million barrels a day beginning in May, reports the New York Times. Analysts forecast that oil consumption in April will fall by about three times that.

Trump filled up the Strategic Petroleum Reserve a month ago with oil at $30 a barrel.

Another brilliant move by our dealmaker-in-chief.

Trump said he was working on stabilizing oil market back on Apr. 2. https://t.co/zkWJGXVQSZ

One cent a barrel oil. Trump gets played by the Saudis and Russians. Just like China. The job losses will be massive. Turns out having a dumb narcissist as President could not be more dangerous to America.