The folks at Zoom, the video conferencing app, saw the number of daily users surge to more than 200 million during the month of March from a previous high of 10 million. The jump is mainly due to people self-isolating thanks to the ongoing coronavirus health threat.

Rolling Stone did a deep dive into how some organizers of actual sex parties have moved into the digital space as a way to help individuals not only cope with fears of what’s going on in the world, but also as a way to stave off boredom.

However, Zoom does not want people using its app for sexual purposes.

“Zoom‘s user policies explicitly prohibit any obscene, indecent, illegal, or violent activity or content on the platform,” a spokesperson for the platform told Rolling Stone.

The spokesperson warned that the company would take a “number of actions” against those found using the app for “any activity that is harmful, obscene, or indecent, particularly as would be understood in the context of business usage,” including “displays of nudity, violence, pornography, [and] sexually explicit material.”

“We encourage users to report suspected violations of our policies, and we use a mix of tools, including machine learning, to proactively identify accounts that may be in violation,” added the spokesperson.

What’s not clear, exactly, is what “machine learning” tools are or how an algorithm would pick up on nudity or sex acts during a video chat. And the company’s privacy guidelines note that “video, audio chat content is not stored” on the platform “unless a meeting is recorded by the host.” That would seem to make monitoring content pretty difficult.

A gay man in Brooklyn (using the pseudonym Oscar Buzz) told Rolling Stone he’s been organizing underground sex parties for gay and trans men for years but started his Zoom events when the quarantine began.

Buzz describes his near-nightly Zoom sex parties as “a way to connect with the community, make sure they’re ok, and make sure they feel good about themselves.” He adds that he doesn’t charge for organizing his online parties. 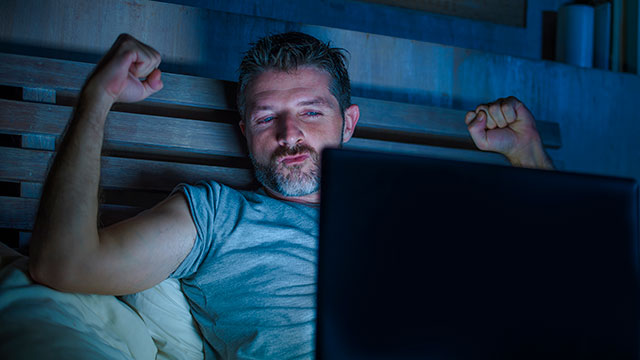 Buzz, who asked Rolling Stone not to print the name of his events for fear of being kicked off Zoom, says the company has to know exhibitionists have been using the app for a long time.

“I think this is another instance of a business that wants to pretend it doesn’t do these things, but of course it does,” said Buzz.

As a nod to Zoom’s “corporate tool” messaging, he recently added a themed “business suit” party to his line up where participants pretended they were part of a mock business meeting – until the clothes came off.

Still, Buzz and other online sex party organizers do have concerns about the platform given the news that Zoom is being investigated for possible lapses in security practices.

For example, internet trolls have learned to exploit a screen-sharing feature in order to “Zoombomb” actual meetings. Some of these instances have included white supremacists hijacking a webinar on anti-Semitism to spread messages of hate.

There’s also a fear of not knowing who might be recording the virtual sex parties. Even though there’s a built-in feature that notifies participants when they’re being recorded, there’s no way of stopping someone from surreptitiously whipping out their phone to record when someone whips it out.

In any case, folks are going to find a way to make a “love connection” (wink wink) somehow, even during an epidemic.

As advice guy Dan Savage tweeted today, “Seems like Zoom could maybe turn a blind eye to consenting adults organizing safe online sex parties on their platform. How hard would that be?”

I don't know… seems like Zoom could maybe turn a blind eye to consenting adults organizing safe online sex parties on their platform. How hard would that be?