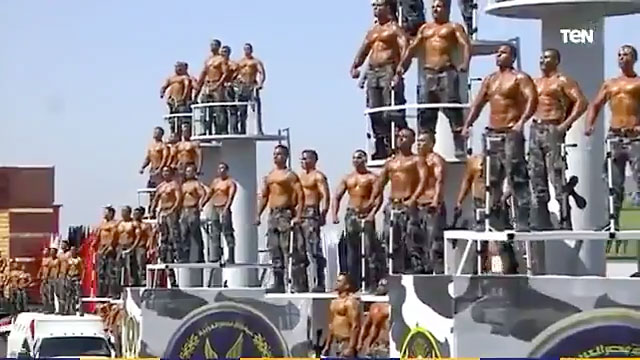 George Takei highlighted the video clip on Twitter writing, “For a terrifyingly homophobic and dangerously anti-LGBT government in Egypt, this screams pretty gay.”

In the video, the shirtless buff graduates are shown riding on military vehicles appearing to be flexing for their lives.

The Daily Star reports over 1,500 cadets took part in the event.

Several of the comments on Twitter compared the event to a Pride parade.

For a terrifyingly homophobic and dangerously anti-LGBT government in Egypt, this screams pretty gay. https://t.co/At216ndhtF

Another clip showed the graduates performing a series of stunts including jumping through rings of fire, breaking cement blocks on each other’s chests with sledgehammers, and climbing up the side of a building.

At one point, the graduates even dive through the air over a set of sharp spikes. 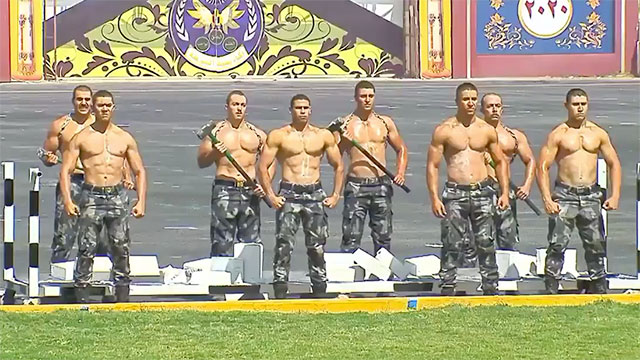 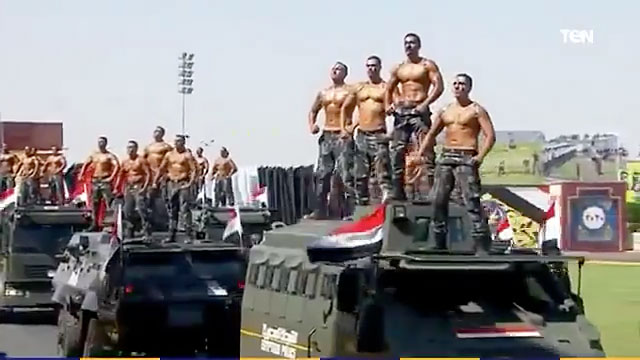 While the spectacle was visually impressive, the sad irony in all this, as Takei points out, is Egypt continues to be a virulently homophobic country.

The Human Rights Watch reported this past spring that Egypt rejected recommendations by several members of the United Nations Human Rights Council to end arrests and discrimination based on sexual orientation and gender identity.

Egypt responded by denying the existence of sexual orientation and gender identity saying the country “does not recognize the terms mentioned” in the recommendation.

But an LGBTQ rights organization in Cairo reported 92 arrests in 2019 for so-called ‘same-sex conduct.’ Included in the report were incidents of “entrapment through dating apps, random arrests off the street and hotel/house arrests.”

Rights Africa notes that 69 percent of the cases were street arrests “with no legal basis for the arrest other than the individual discretion of the police officers.”

As there is no explicit law banning same-sex conduct, the majority of LGBTQ prosecutions are based on “debauchery” laws insinuating prostitution.