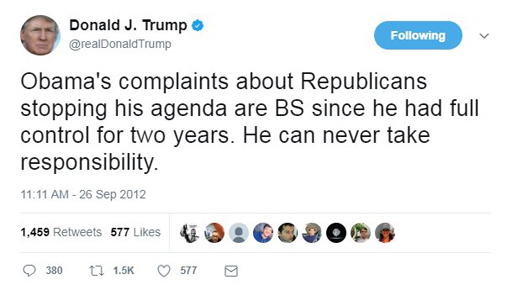 Proving there really is a Trump tweet for everything, here’s a classic from 2012:

“Obama’s complaints about Republicans stopping his agenda are BS since he had full control for two years. He can never take responsibility.”

Contrast that with the Trumpster’s tweet today decrying no help from Democrats on the health care bill they were excluded from working on:

With only a very small majority, the Republicans in the House & Senate need more victories next year since Dems totally obstruct, no votes!

Bonus tweet! How about this nugget from 2013 on “leadership?” So, if health care reform doesn’t happen, he’s gonna take responsibility?