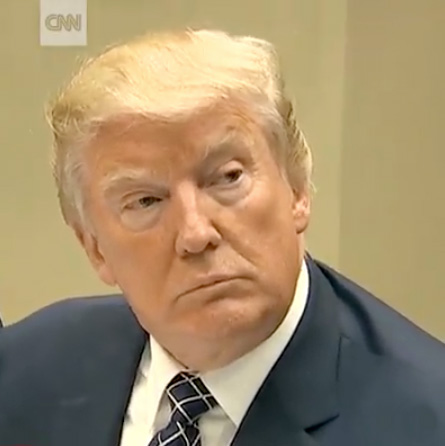 President Donald Trump side-stepped responsibility on health care reform today saying he would let Obamacare “fail” after six months of botched efforts by his own party to repeal and replace the Affordable Care Act.

According to Trump, “the Democrats are gonna come to us” and ask how to fix it, working with the GOP.

Highlighting how out of the health care loop he was during the past few weeks, Trump added he was “very surprised” when two GOP senators suddenly withdrew support for the Republican health care bill on Monday night, sealing the bill’s fate.

“The way I look at it, we’re going to have to get some more people elected that are Republican,” Trump said.

Republicans currently hold majorities in both chambers of Congress as well as the White House. After seven years of voting to repeal the ACA, it’s incredible no one had a plan ready to go that Repubs could get behind.

Watch Trump speak to the press below:

Because “Let Obamacare Fail” sounds better than “Let millions of Americans suffer and die so I can blame it on the black guy.” https://t.co/BDEdeNrmuY

Striking thing for Trump to say. To repeat, “let Obamacare fail” would mean millions of poor and sick people who depend on it would suffer. https://t.co/QSzDSDDpB5

White House spokesperson Sarah Huckabee Sanders blamed the minority Democrats, as if that makes any sense:

“I would say Democrats. They’re responsible,” Deputy Press Secretary says on who is responsible for failure of health care legislation pic.twitter.com/Bkxavavxhn