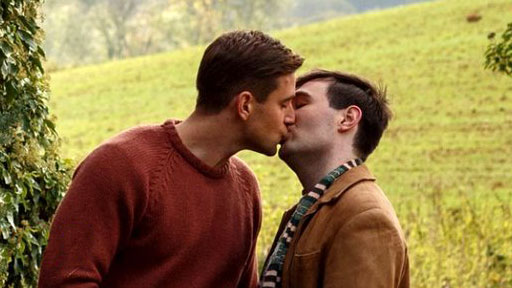 In cast you were wondering what to watch on TV this weekend:

The ‘Fab 5’ are back! Starting today all 8 episodes of Season 2 of Netflix’s Queer Eye.

This season the ‘make better’ show expands its scope of ‘mentees’ including a transgender man named Skyler and a beloved church mama. Get the tissues cause I’m not crying, you’re crying.

Produced to observe the 50th anniversary of when homosexuality was decriminalized in the UK, Man In An Orange Shirt chronicles two love stories sixty years apart.

In the 1940s, lovers Michael (Oliver Jackson-Cohen) and Thomas (James McArdle), live under threat of jail if their affair is discovered, leading Michael to marry a woman, Flora (Joanna Vanderham).

Moving to the present, the second half of the two and a half hour movie reveals Flora (Vanessa Redgrave) as grandmother to a young gay man, Adam (Julian Morris), who is in the midst of his own sexual confusion.

TV Guide Magazine: “A powerful Masterpiece movie that bridges generations with its tale of repressed and forbidden affections.”

The Boston Globe: “I was afraid the message of “Man in an Orange Shirt” would be simplistic — being gay was hard then, but it’s easy now, look how far we’ve come, etc. But the film, strewn with symbols that carry from one story to the other, has other things in mind, and they make it distinctly moving.”

You can catch the film on PBS’s Masterpiece this Sunday. The DVD becomes available on June 19.