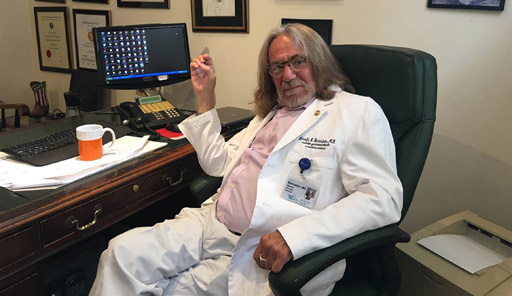 “He dictated that whole letter. I didn’t write that letter,” Bornstein told CNN on Tuesday. “I just made it up as I went along.”

The admission is an about face from his answer more than two years when the letter was released and answers one of the lingering questions about the last presidential election. The letter thrust the eccentric Bornstein, with his shoulder-length hair and round eyeglasses, into public view.

“That’s black humor, that letter. That’s my sense of humor,” he said. “It’s like the movie ‘Fargo’: It takes the truth and moves it in a different direction.”

He said Trump read out the language as Bornstein and his wife were driving across Central Park.

“(Trump) dictated the letter and I would tell him what he couldn’t put in there,” he said. “They came to pick up their letter at 4 o’clock or something.”

Just another con job by a con man.

As a presidential candidate, I have instructed my long-time doctor to issue, within two weeks, a full medical report-it will show perfection— Donald J. Trump (@realDonaldTrump) December 3, 2015

For real, the public does have some right to know the health of their presidential candidates before voting on them. It’s no small matter. And Trump deprived voters of that right. It’s pretty astonishing

So, Bornstein is saying these were Trump’s words about… himself >>

“His physical strength and stamina are extraordinary. If elected, Mr. Trump, I can state unequivocally, will be the healthiest individual ever elected to the presidency.”