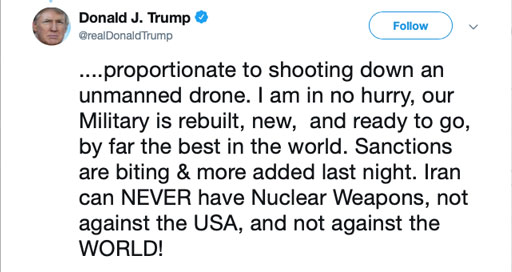 President Trump tweeted Friday morning that the United States military was “cocked and loaded” for a strike against Iran on Thursday night, but that he reversed himself 10 minutes to ‘go time’ after a general informed him 150 people would probably die in the attack. 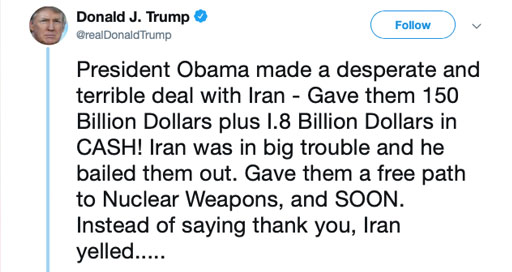 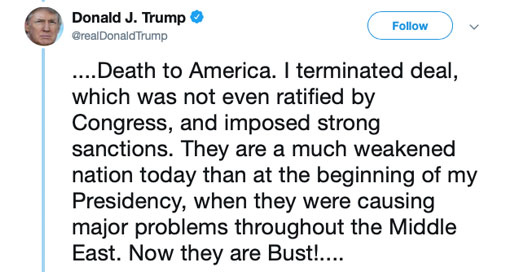 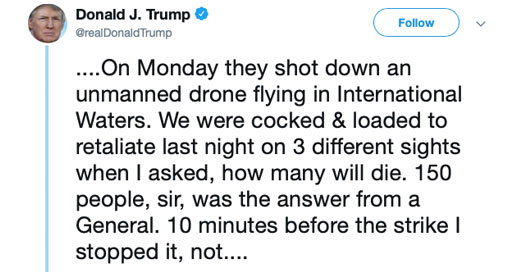 I believe the two phrases Glorious Leader was mangling were “locked and loaded” and “guns were cocked.”

The president said in a series of tweets just after 9 a.m. that he was prepared to retaliate against three sites in Iran for that country’s shooting down an American drone, but that he was “in no hurry.” He indicated that the death of 150 Iranians would not be “proportionate to shooting down an unmanned drone.”

It was unclear why Mr. Trump would have been getting information about possible casualties so late in the process of launching military action. Such information is typically discussed early in the deliberations between a president and national security officials.

Trump also indicated that new sanctions have been imposed on Iran, but didn’t go into detail.

Folks on both sides of the political spectrum criticized Trump for the strike and reversal.

Rep. Liz Cheney (R-Wyoming) told conservative radio host Hugh Hewitt: “The failure to respond to this kind of direct provocation that we’ve seen now from the Iranians, in particular over the last several weeks, could in fact be a very serious mistake.”

And in the Twitterverse:

Who feels comfortable with an erratic Trump as commander-in-chief at this moment? https://t.co/f7HOmQQXRw

There’s absolutely nothing about this aborted Iran strike that looks good on the world stage tonight. Nothing. Nothing strategic. Nothing geopolitically advantageous. Nothing reflecting well on US political leaders. Nothing reassuring to allies. Only a projection of incompetence.

“Hundreds of casualties” would only have been the beginning. Where would Iran strike? What next? This was/is so reckless and dangerous. https://t.co/91kx9jJegl

Trump didn’t realize UNTIL TEN MINUTES BEFOREHAND that a planned airstrike would kill over a hundred people and would therefore be grossly disproportionate to the loss of a UAV?

To say this is amateur hour would defame amateurs.