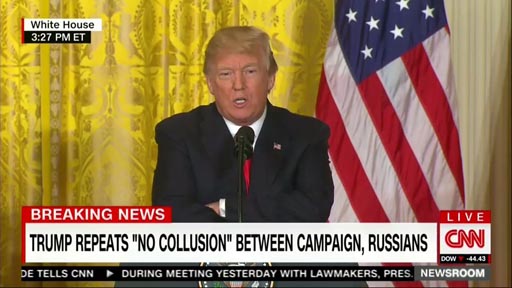 Donald Trump, who claims he has no time to watch cable TV, says he got rave reviews for his “performance” yesterday during the televised 54-minute meeting with Congressional leaders.

During the first cabinet meeting of 2018, Trump told the press the “reviews” were so good, he says he got “letters” from news anchors congratulating him on his “performance.”

Later, when asked about “letters” of praise, the White House released a list of links to video clips showing positive feedback on the bipartisan meeting.

By the way, I’ll mention that as I watched the televised meeting, I was completely aware that the reason Trump allowed the press to stay and view the meeting was specifically meant to GIVE a performance. After the new explosive expose by Michael Wolff where Trump’s mental faculties have been questioned, I had no doubt that the Donald was trying to show Americans how stable he can try to be.

Later, at a press event with the Prime Minister of Norway, Trump was asked if he would be willing to sit down with Special Counsel Robert Mueller for a face to face interview regarding the ongoing investigation into Russian meddling in the 2016 election.

Last June, Trump said he was “100 percent” willing to give testimony under oath. Additionally, his legal team has stressed that he would cooperate with the investigation.

Wellllll, it’s a New Year and the Trumpster doesn’t seem so inclined to sit down with Mueller now. In fact, he said it was “not likely” since there was “no collusion” with Russia.

In fact, Trump completely dodged giving a direct answer instead repeating the phrase “no collusion” 8 times in the span of a minute and a half.

Watch the video below, and check out that body language with his arms crossed. Just saying…

He also says he received letters from news anchors praising him (he does not specify who) pic.twitter.com/PTRarazQqA

President Trump “There was absolutely no collusion. Everybody knows it… It’s a Democrat hoax that was brought up as an excuse for losing an election.” pic.twitter.com/FpzQnA7f7X