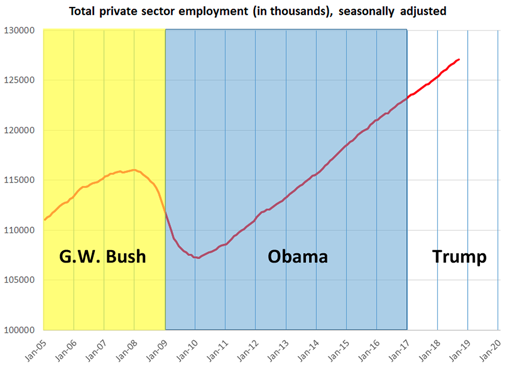 Donald Trump is very fond of taking credit for the current economic conditions in the United States.

But did he really ‘create’ this? Was there some miraculous reversal of trends that he engineered?

For instance, start with Trump’s campaign promise that 25 million jobs would be created over 10 years if he were elected.

President Trump started with a distinct advantage with a workforce of 145.7 million, 9% larger than when President Obama took office. If the workforce were to only grow by 2%, that would add just over 2.9 million jobs a year or 243,000 per month. Over the course of 10 years, there would be over 29 million jobs added.

Additionally, over President Obama’s last six and five years in office after the economy had recovered from the Great Recession, the average employment gains were 2.42 and 2.48 million jobs per year. Pretty much on track to add 25 million over 10 years. So it appears that Trump can reach his 25 million job growth goal even if the economy continued to grow at the pace under Obama .

To provide a monthly comparison, the average employment gain in Obama’s last six years in office (after getting out of the recession’s impact) was 201 thousand. And the average for his last five years was 207 thousand, essentially the same as the 208 thousand for the first nine months this year.

The second graph that shows the U.S. unemployment rate continues on essentially the same path even with a slightly higher GDP growth rate (based on trailing four quarters growth). 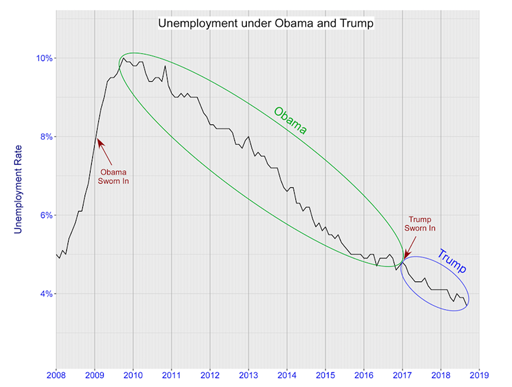 A child can see that the trends for both job creation and unemployment are continuing in pretty much a straight line.

He’s managed to not screw up what President Obama put in motion.