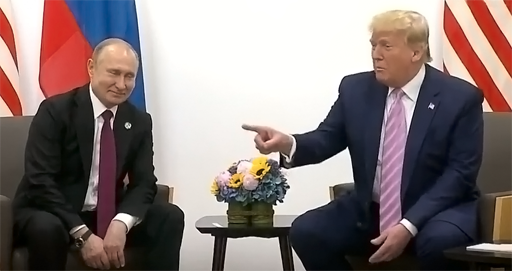 Enjoying the attention of press and camera crews at the G20 summit in Osaka, Japan, Donald Trump was asked if he was going to warn Russian President Putin against meddling in U.S. elections.

“Yes, of course I will,” replied Trump.

They all thought it to be quite hilarious.

All U.S. intelligence agencies have agreed that Russian forces worked to influence the 2016 presidential election which delivered a surprise win to Trump.

Trump also joked with the Russian leader about what he calls ‘fake news,’ telling Putin, “Fake news is a great term, isn’t it? You don’t have this problem in Russia, but we do.”

Smirking Trump jokes to Putin: don’t meddle in US election.

Trump also bonded with Putin over a scorn for journalists.

“Get rid of them. Fake news is a great term, isn’t it? You don’t have this problem in Russia, but we do.”

“We also have,” Putin answered, in English. “It’s the same.”

They shared a chuckle. pic.twitter.com/atGGYxnwfc