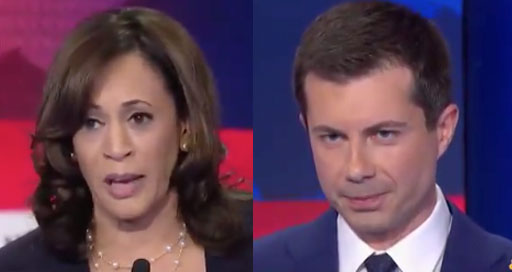 By most political experts’ accounts, the second night of Democratic debates was dominated by a stellar performance by California Sen. Kamala Harris.

Former Vice President Joe Biden, the current front-runner in polling, found himself playing defense a surprising amount of time given that this is the first Democratic debate.

“Hey guys, you know what? America does not want to witness a food fight. They wanna know how we’re going to put food on their tables.”

POINTS for the adult in the room. #DemDebate2 pic.twitter.com/FnufZ2t1IH

‘There was a little girl in California who was part of the 2nd class to integrate her public schools & she was bused to school every day. And that little girl was me.’@KamalaHarris called out @JoeBiden for defending segregationists & his past opposition to busing #DemDebate pic.twitter.com/ZYAtAfP36B

Beautiful response from @PeteButtigieg on the hypocritical way the GOP shields itself in the cloak of Christianity while condoning human atrocities. #DemDebate pic.twitter.com/NkIgpZuMVg

“I couldn’t get it done.” @PeteButtigieg displays great humility as he explains the way he wishes he could end police-involved violence against black people. #DemDebate pic.twitter.com/QWX5QmIUb9

FiveThirtyEight teamed with Morning Consult to determine who ‘won’ the debates:

Among all 20 candidates, Kamala Harris, Elizabeth Warren and Julián Castro earned the highest scores for their debate performances relative to their favorability rating before they took the stage, according to the voters in our poll.

Bernie Sanders and Cory Booker also rated well, but their scores were more in line with their pre-debate favorability.

Meanwhile, voters didn’t exactly think Beto O’Rourke did badly on Night 1, but his grades were underwhelming given his popularity.

A CNN focus group agreed with the pundits: