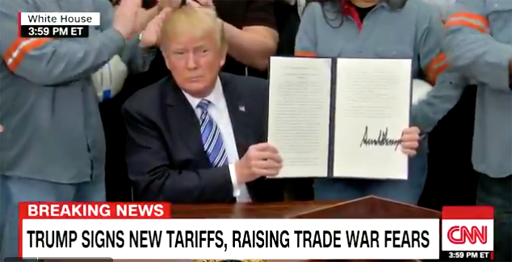 Even though leaders from his own party disagreed with him, Donald Trump moved ahead on his own signing the orders to begin imposing steep tariffs on imported steel and aluminum.

After a week of furious lobbying and a burst of last-minute internal debates and confusion, Mr. Trump agreed to exempt, for now, Canada and Mexico and held out the possibility of later excluding allies such as Australia. But foreign leaders warned of a trade war that could escalate to other industries and be aimed at American goods.

“The actions we are taking today are not a matter of choice; they are a matter of necessity for our security,” Mr. Trump said in a ceremony at the White House where he officially authorized the tariffs, which will go into effect in 15 days.

More than 100 GOP members of Congress wrote Trump on Wednesday urging him to “reconsider the idea of broad tariffs to avoid unintended negative consequences.” https://t.co/6zIQkdtMfa pic.twitter.com/jO0zMTH3Tq

We know from history that tariffs inevitably lead to trade wars that hurt the economy. But Trump doesn’t care about facts or analysis. We have never had a president so completely detached from reality.