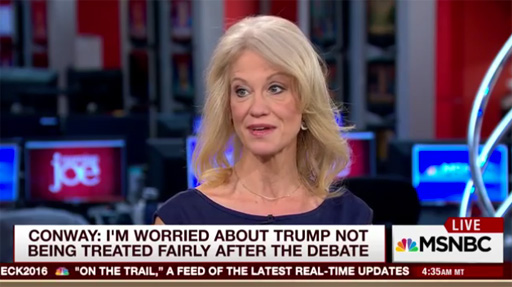 During an appearance on MSNBC’s Morning Joe, Donald Trump campaign manager refuses to answer why her candidate called presidential debate moderator Lester Holt a “Democrat” when he’s a registered Republican.

Of course, we all know why: Trump was laying the groundwork to blame Holt in case Trump doesn’t feel like he’s treated “fairly” tonight.

Mika: Why did Trump lie about Lester Holt?

Kellyanne: He didn’t lie, he just… A lie would mean that he knew the man’s party registration.

So, it’s not a lie when you say something untrue because you didn’t know what the hell you were talking about in the first place?

Btw, watch Conway successfully run out the clock without ever answering
Mark Halperin’s question about why Trump lied about Holt’s political
affiliation. At the 3:19 mark as Joe Scarborough calls for a move-on,
Conway gives you that coy smile.

.@KellyannePolls: Trump ‘didn’t lie’ about Lester Holt, ‘a lie would mean that he knew the man’s party registration’ https://t.co/dZWTCwpoim