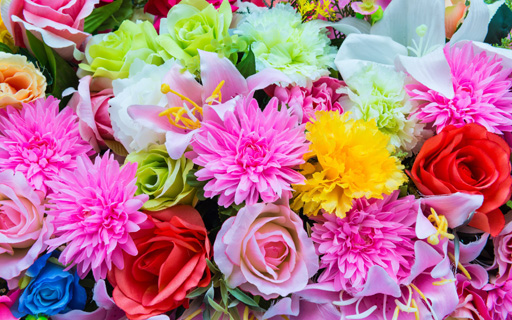 After some of the silliest back and back I’ve yet to see in this audacious campaign cycle, word comes from Donald Trump’s campaign manager that “scandal girl” Gennifer Flowers (dumb spelling) will NOT be attending the first presidential debate tomorrow night.

As many may know, the issue began earlier this week when billionaire Mark Cuban tweeted that he had been invited by the Hillary Clinton campaign to sit in the front row of the debate Monday night at Hofstra University, referring to the event as “the humbling at Hofstra.”

Then, Donald Trump tweeted a “threat” that he might just invite “Jennifer Flowers” (there’s that troublesome spelling issue again).

That was followed by Flowers herself (who can at least spell her dumb first name): 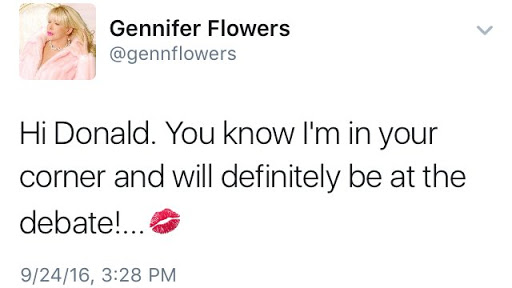 One, it’s just tacky that Flowers would try and jump in the limelight again after being a mistress to a married man almost 30 years ago. I mean, wtf?

Second, the analogy of Flowers to Cuban makes no sense. If Cuban is somehow a “threat” to Trump as another “billionaire,” then instead of Flowers, shouldn’t Trump be looking for a former secretary of state that’s critical of Clinton? Oh, I forgot, there isn’t one.

In any case, today Trump campaign manager Kellyanne Conway told ABC News George Stephanopoulos that Flowers “has not been invited by the campaign.”

Conway said the reason for the threat was “to remind people he’s a great counterpuncher.”

Who clearly has little understanding of analogies.

So, perhaps that ends this silly, silly business.

No Flowers for you, debate audience.