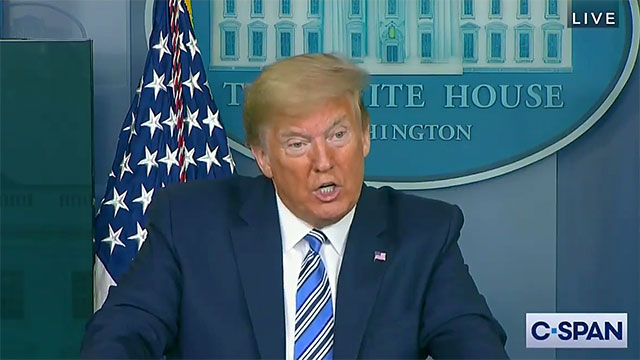 Over the weekend, Donald Trump continued to push the idea that testing for the coronavirus was slowed because his administration “inherited a lot of garbage” from the Obama administration.

The statement makes no sense whatsoever since a test couldn’t have been developed before the virus was discovered, which first happened in China in late 2019. That was almost three years after Obama left the White House.

Additionally, the World Health Organization offered to provide tests for the coronavirus, but the Centers for Disease Control insisted on developing its own. But the first round of tests didn’t work accurately, the resulting delay allowed the virus to promulgate across the country for weeks during February and early March.

You can see Trump deflect responsibility in the video below. By the way, the softball question framed to blame Obama came from a reporter at the ultra Trump-loving One America News Network (OANN).

"We inherited a lot of garbage … horrible ventilators" — Trump responds to a second question from ultra-sycophantic OAN, this one about coronavirus testing failures, by trying to shift blame to Obama (Obama left office in 2017 and the virus didn't reach the US until 2020) pic.twitter.com/II60SLGOrn

…But Trump blames Obama for the lack of a test that didn’t even exist for a virus that didn’t exist when he was President. And now Republicans want to fire Fauci.

Let's say Obama did. What the fuck has @realDonaldTrump been doing about it for 3 years? Sweet FA.

The man is inadequate.