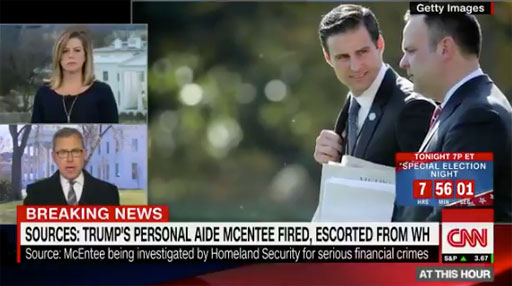 More news coming out of the dumpster fire that is the Trump Administration – Trump’s personal assistant, Johnny McEntee, was quietly fired on Monday from the White House.

After months of issues with his background security check, he was let go and escorted from the White House yesterday.

According to CNN, McEntee’s security clearance hit a snag “because he is currently under investigation by the Department of Homeland Security for serious financial crimes.”

But remember, according to Trump this White House has “no Chaos, only great Energy!”

Now, where do you get a job when you’re being investigated for “serious financial crimes?”

He was immediately hired today by the Trump 2020 reelection campaign.

President Trump’s personal aide Johnny McEntee was fired because he is currently under investigation by the Department of Homeland Security for serious financial crimes, a source familiar with his firing tells CNN https://t.co/n09VdRlb8b pic.twitter.com/anoqny6OdM

The new Fake News narrative is that there is CHAOS in the White House. Wrong! People will always come & go, and I want strong dialogue before making a final decision. I still have some people that I want to change (always seeking perfection). There is no Chaos, only great Energy!