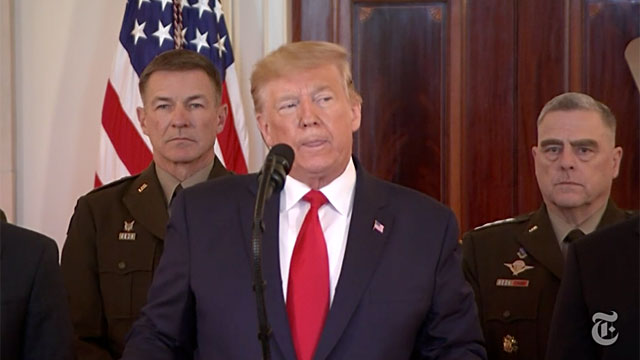 “All is well” was the message from Donald Trump after Iran launched more than 12 ballistic missiles at U.S. military bases in Iraq, an attack seen as retribution for the U.S. strike on military commander Qassim Soleimani.

According to the New York Times, U.S. and Iraqi officials said there were no deaths from the attacks on bases housing American troops. But Iranian news outlets claimed differently, with some reporting dozens killed.

Speaking to the nation this morning, Trump said no Americans or Iraqis were killed in airstrike at the military base in Iraq and Iran appears to be standing down.

All is well! Missiles launched from Iran at two military bases located in Iraq. Assessment of casualties & damages taking place now. So far, so good! We have the most powerful and well equipped military anywhere in the world, by far! I will be making a statement tomorrow morning.

"Iran appears to be standing down, which is a good thing for all parties concerned and a very good thing for the world. No American or Iraqi lives were lost because of the precautions taken." https://t.co/gATFueUKlY pic.twitter.com/cRvtreF589