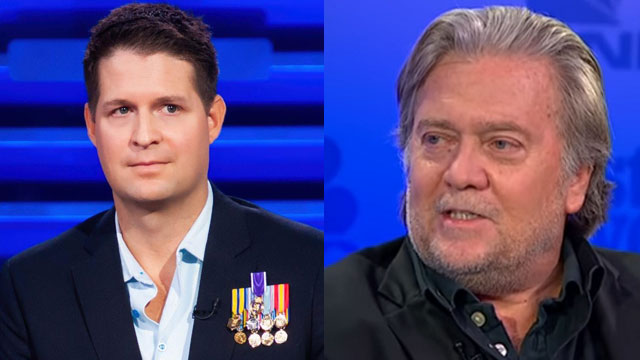 Stephen Bannon, a former top aide to President Donald Trump, and Brian Kolfage, the leader of the crowdfunded “We Build The Wall” effort, have been charged with conspiracy to commit wire fraud and money laundering, federal prosecutors said Thursday.

Kolfage, the criminal complaint said, “covertly took more than $350,000 in funds that has been donated to “We Build The Wall” for his personal use.”

Bannon and the other two spent on “travel, hotels, consumer goods, and personal credit card debts.” The four men found out they would potentially be subjected to a criminal investigation in October 2019, at which point they allegedly “took additional steps to conceal the fraudulent scheme.”

The New York Times reports prosecutors say that after siphoning money from the project, Mr. Bannon plowed nearly $1 million into paying off his personal expenses.

Of course, asked about the arrests and indictments, Trump now knows practically nothing about the project and in his recollection, Bannon was barely a part of his team.

When asked about other Trump allies like Roger Stone, Michael Flynn, Paul Manafort and others who’ve been indicted on serious charges, Trump pivots, “Well, there was great lawlessness in the Obama administration.”

Here’s Trump describing Steve Bannon as something akin to a coffee boy pic.twitter.com/DaRChb8pv0

REPORTER: Sir, it’s not just Steve Bannon. It’s Roger Stone, Michael Flynn, Rick Gates, Paul Manafort. What’s that say about your judgement and the culture of lawlessness around you?

TRUMP: Well, there was great lawlessness in the Obama administration. pic.twitter.com/sjRExKljrz

Donald Trump Jr. praised We Build The Wall and Brian Kolfage at a 2018 event: “This is private enterprise at its finest. Doing it better, faster, cheaper than anything else. What you guys are doing is amazing.” pic.twitter.com/hOL25JoZPI