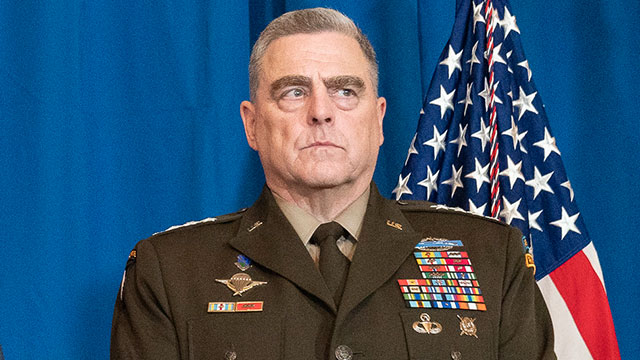 Gen. Mark A. Milley, Chairman of the Joint Chiefs of Staff, apologized for appearing in the now-infamous Lafayette Park photo opp with Donald Trump after peaceful protesters were forcibly removed from the area.

The Pentagon’s top general apologized on Thursday for appearing alongside President Trump near the White House after authorities forcibly removed peaceful protesters from the area, saying that it “was a mistake that I have learned from.”

Gen. Mark A. Milley, the chairman of the Joint Chiefs of Staff, made the remarks in a prerecorded graduation speech to students at the National Defense University. He has been roundly criticized for thrusting the military into politics by walking alongside the president on June 1 as Trump traveled on foot to a nearby church that had been damaged during protests following the police killing of George Floyd.

Milley advised the students that it is important to keep “a keen sense of situational awareness” and that he had failed to do so as he walked from Lafayette Square in combat fatigues alongside the president, Defense Secretary Mark T. Esper and other senior advisers.

“As many of you saw the results of the photograph of me in Lafayette Square last week, that sparked a national debate about the role of the military in civil society,” Milley said. “I should not have been there. My presence in that moment, and in that environment, created the perception of the military involved in domestic politics.”

It takes a mature, responsible adult to admit making a mistake. Good on Milley.