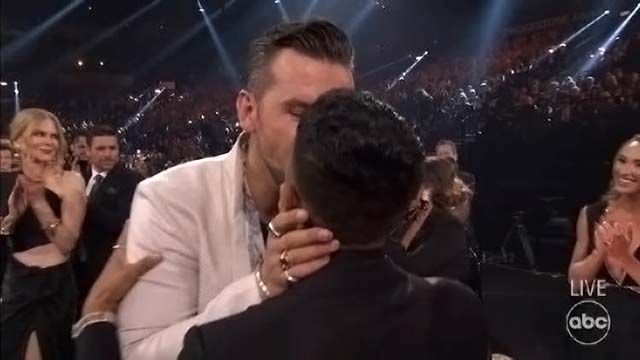 Country singer TJ Osborne celebrated the win by Brothers Osborne as the Vocal Duo of the Year by giving his boyfriend Abi Ventura a smooch – the first same-sex kiss broadcast from the CMA Awards.

TJ Osborne openly kissing his date upon winning Vocal Duo of the Year is a very special moment. #CMAawards pic.twitter.com/8sn3s6yOGn

“It’s been a crazy roller coaster of a year for us in so many ways, especially for me emotionally,” TJ said during his acceptance speech. “And to have you all support me, it really does feel like love wins tonight. Thank you.”

“Give this boy a round of applause!”  added older brother John. “We love this genre, we love the people, we love all of you so much.”

Brothers Osborne accepts the award for Vocal Duo of the Year #CMAawards pic.twitter.com/CyXCnHiRpZ

TJ Osborne publicly came out as gay earlier this year in an interview with Time Magazine becoming the first out country music artist signed to a major label.

On bringing Ventura to the awards shindig, TJ told Entertainment Tonight, “I hope this doesn’t make anyone uncomfortable, but this is how I feel. I love this person, and I want to be open in every way.”

“Hopefully [it can] show people that they also don’t need to hide or alter themselves in any way,” he added.

Growing up listening to this genre, I never thought I would see this representation, especially at the #CMAawards
Thank you @TJOsborne
and @CountryMusic
😭🥰🏳️‍🌈https://t.co/WAcj85gsz0

Let me tell you seeing an openly gay man win a #CMA award & the cameras not cut away when he kissed his date, is not something I thought I’d see in my lifetime. Happy to be proven wrong. Hell yes TJ Osborne!!!!! pic.twitter.com/CWxkuoQ1Me

Later, Brothers Osborne took the stage to sing “Younger Me,” a song from their CMA Award-nominated Skeletons album.

TJ previously shared that he wrote the song about his experience coming to terms with his sexuality.

“For many years I would watch this show, year after year,” Osborne said before their performance. “I dreamed of being up here on this stage. There were so many things that were hurdles for me. I always felt, truthfully felt, like it would never be possible because of my sexuality … to be here. And I wish my younger me could see me now.”

The win is the duo’s 4th CMA Award.

While Nashville has embraced the duo’s music – and TJ’s coming out – not all of Tennessee has been so accepting.

Earlier this year, the Tennessee Senate unanimously approved a resolution to honor TJ. But Republicans in the state’s House of Representatives blocked the honor saying “we have some concerns.”