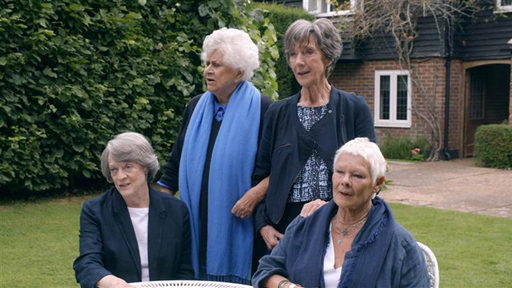 Truly, no one throws friendly shade like a Dame.

And by ‘Dame,’ I mean those delicious British divas, Dames Maggie Smith, Judi Dench, Joan Plowright, and Eileen Atkins, who are featured in the upcoming documentary, Tea with the Dames.

Set in a British country house, the four actresses spend a day together allowing cameras to capture friendships dating back more than half a century. The four icons chat on their careers and spill the ‘tea’ a bit.

The film has a 100% rating on Rotten Tomatoes.

In a one-minute teaser below, Judi Dench shares her belief that “We’re going to work forever, if we’re asked.”

Without a pause, Maggie Smith, who knows how to drop a good line, replies, “But, you’re always asked first, if I may say so.”

“I’m turning on you, it’s all coming out now,” Smith says with a hint of smile.

Plowright, after adjusting her hearing aid, chimes in saying her American agent has told her in the past that they are always on the lookout for “a nice cameo that Judi Dench hasn’t got her paws on.”

EW also reports that the grand ‘Dames’ didn’t go easy on the film crew either.

The session gets off to a shady start right from the get-go as the women pose for a photo while cutting the crew down to size.

“That’s an awful angle. It’s not fair to old ladies,” Atkins quips as Smith cackles before asking an off-camera photographer, “Is it your first day?”

When asked about working with their husbands, Plowright admits, “Obviously mine was the most difficult.”

Smith, again with the dry retort, “Well, we all found him tricky.”

For those who miss Smith’s drop-dead delivery, you’ll be happy to know the upcoming Downton Abbey movie has announced a release date of September 20, 2019.

Here’s the full trailer for Tea with the Dames. Take a break and enjoy the shade with the ‘Dames.’

Tea with the Dames is in limited release on September 21.