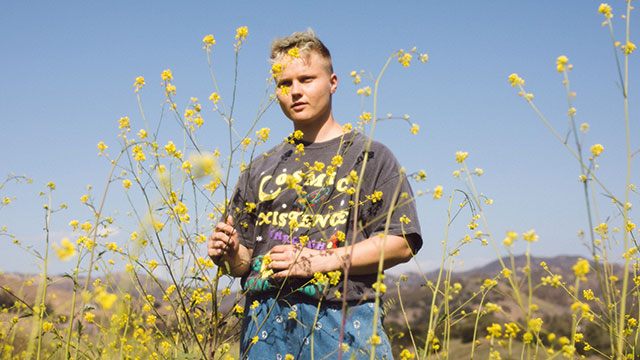 Out singer/songwriter Miki Ratsula releases their imminently listenable new single and music video, “second,” which explores their anxiety around getting top surgery, and their fear that their long-time girlfriend would no longer love them.

The So-Cal based Finnish American artist, who identifies as non-binary, has built a loyal following by openly and honestly welcoming people into their world, using their platform to candidly document their life, from coming out to getting top surgery just a couple months ago.

Miki’s girlfriend, Hope, joins them in the tender and artfully crafted music video for “second.”

“I knew I wanted the video to represent queer bodies and relationships in the most authentic way,” says Ratsula. “Before getting my top surgery, I really wish I had seen more representation of what queer bodies can look like, and that they can be loved.”

That lack of representation can lead to all kinds of ruminating for young people trying to figure out who they are, and that’s reflected in the lyrics of “second.”

The guitar-driven mid-tempo is sonically soothing with an tender undercurrent of brimming emotion as Ratsula’s intimate vocals draw the listener in closer and closer.

The video, directed by Evers Pund, plays on an innately human scale capturing moments between Ratsula and Hope touching, laughing, and living in the moment. The interplay between the couple subtly moves from indoors and shadows to eventually coming out of the dark into the light reflecting part of the artist’s journey to here.

Oh, and there’s an asteroid heading for Earth, but we’ll have to see how that plays out.

Check out my chat with the talented singer/songwriter about the new single, Pride Month and more after you hit play. I really liked “second” the moment I heard it.

The Randy Report: Congratulations on your new song “second.” What was the inspiration for the song, and the meaning behind the title?

Miki Ratsula: Thank you so much! I came out as non-binary last year and right after I decided to pursue getting top surgery I wrote down the line “I just wanna love myself so I can love you better.” I had a lot of anxiety revolving around the surgery and worrying about whether it would negatively affect my relationships.

I wrote the song later that year expanding on that original line, and exploring those thoughts about losing my partner, but knowing that she’d stay by side through it all. The title comes from the line “I’m obsessed with second guessing but you don’t for a second.” While I’m all in my head thinking the worst, she’s always there reminding me of how loved I am.

TRR: Musically, “second” draws us in – it doesn’t hit us over the head. Did you go into the song knowing you wanted a particular sound/feel/texture?

MR: As soon as the song was written I hopped straight into working on the production. I knew I wanted it to stay relatively simple so that the lyrics can be the focal point.

Lyrically, the song starts in a darker place and as I sing and expand on those darker thoughts, the lyrics start to brighten up a bit. I think it represents exactly what my thought process was like.

I wanted the music to also follow the emotions of the lyrics, which is why it’s complemented by relatively darker tones. But at the end of the song when you can sense the breath of fresh air I finally have, my girlfriend is actually singing along with me. We literally come together at the end of the song.

TRR: Regarding the end of the music video, we now know where you want to be when the world ends I guess…? 🙂

MR: We had a pretty good sense of how we wanted the music video to look, but the director we worked with, Evers Pund, came up with the genius idea to add a parallel “end of the world” storyline with the comet.

For me, the end of the world in this video actually represents a new beginning to a life where I love myself and can be better person for the people I love. The comet represents the death of my self hatred. The end of the video also highlights the idea that my girlfriend is there for me for everything, even when the world is ending.

TRR: You shared on Instagram last summer that the pronouns thing was still a scary thing for you. I think that’s important for people to understand it’s not as simple as just saying  he/him, she/her, they/them…

I still face adversity with my pronouns, even in the music industry. But it’s just made it more clear on who I really want to be working with. I wish people could take a step back and realize how genuinely easy it is to respect people’s pronouns. It takes more effort to be ignorant and to make a mockery of us than to just use the correct ones.

MR: My therapist told me “someone else’s urgency is not your emergency”.

TRR: It’s Pride Month – what does that mean to you?

MR: It means representation and resilience. I’ve had too many cis straight people tell me I’m too openly queer. Pride is a time for me to push back even harder on that ideology and unapologetically share my experience and queer body.

I truly just want to be the artist I needed growing up. I hope that by me sharing my truth it can help other queer people to feel valid, as younger me would’ve very much needed.