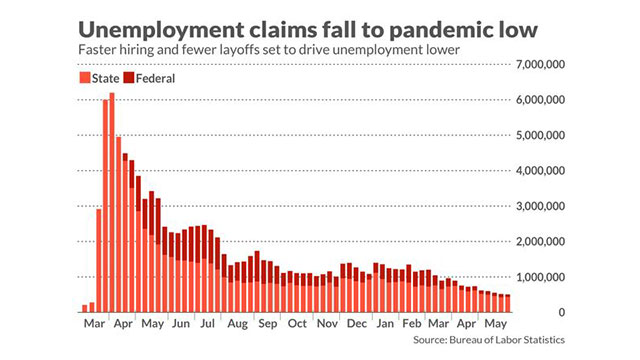 • CNBC: The labor market continues to improve as initial jobless claims fell to 385,000 last week. The last time claims were lower was the week of March 14, 2020, with 256,000. The number spiked to nearly 3 million the following week and peaked at more than 6.1 million in early April as governments across the U.S. shut down businesses in an effort to slow the coronavirus spread.

• Instinct Magazine: In honor of Pride month, the American Conservatory Theater (A.C.T.) will stream for one week only Armistead Maupin’s Tales of the City The Musical. The 2011 show will stream at Broadway On Demand’s National Theater Network.

• Edge Media: A viral video about a 73-year-old man coming out and being celebrated by his neighbor has taken the internet by storm. “My dad’s neighbour just came out as gay at 73!” reads the video’s caption. “His family aren’t supportive. So Dad did this to show him he is not alone.”

• Washington Post: U.S. prosecutors this week put a price tag for the first time on damage to the U.S. Capitol from the Jan. 6 breach — $1.5 million so far — and are asking defendants to cover some of that in plea offers. Prosecutors with the U.S. attorney’s office in Washington are seeking to require restitution of $2,000 in each felony case and $500 in each misdemeanor case.

• Delusional: Writing for the National Review, Charles Cooke reports, “Donald Trump does indeed believe quite genuinely that he — along with former senators David Perdue and Martha McSally — will be ‘reinstated’ to office this summer after “audits” of the 2020 elections in Arizona, Georgia, and a handful of other states have been completed.

• Twitter: The U.S. Embassy at the Vatican is flying the rainbow flag for Pride Month and a host of Republican politicians, religious right leaders, and far right media figures are losing their minds that the government would promote tolerance.

This is a deliberate provocation from the US embassy to the Vatican. It is intended to offend devout Catholic sensibilities. Trampling on human hearts is what the Left does best. https://t.co/J7CizPWBT9