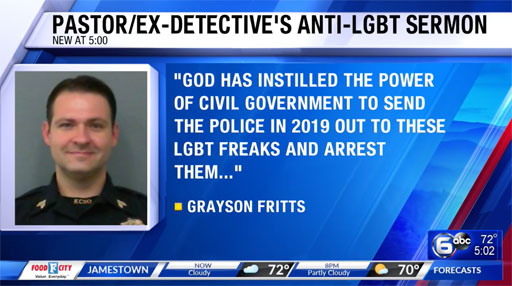 A Sheriff’s Office detective who is also a pastor at the All Scripture Baptist Church in Knoxville, Tennessee, has drawn heavy criticism for a sermon he gave on June 2 where he called on police to “enforce a bible passage” that calls for killing LGBTQ people.

During a sermon titled, “Sodomite Reprobates,” Grayson Fritts said “The purpose of this sermon is, our government, like the police, should enforce Leviticus 20:13,” reports local CBS News affiliate WVLT.

In the King James Bible, Leviticus 20:13 reads, “If a man also lie with mankind, as he lieth with a woman, both of them have committed an abomination: they shall surely be put to death; their blood shall be upon them.”

Fritts said that “God has instilled the power of civil government to send the police in 2019 out to the LGBT FREAKS and arrest them.”

The detective said “riot teams” should round up gays at Pride events, take them to jail and put them on trial.

“We got a bunch of them we’re gonna get convicted because they’ve got their pride junk on and they’re professing what they are, they’re a filthy animal,” said Fritts.

If convicted, Fritts’ prescription is to put the LGBTQs to death.

On Wednesday evening, WVLT reporter Robert Grant attended a service where Fritts delivered another sermon at his church. According to Grant, Fritts concluded his sermon with the message, “Put homos to death.”

WVLT news anchor Amanda Hara posted on her Facebook page a photo of a message left after Fritts’s sermon that read, “Dear Pastor Fritts, I don’t know what happened to you, but I am so sorry. Love, Thy Neighbor.”

Interestingly, the Sheriff’s office reports the detective put in a request to take part in the Knox County Voluntary Workforce Reduction Buy Out program days being delivering the controversial sermon.

Timing is everything, no?

Sheriff Tom Spangler issued a statement saying Fritts is “currently on paid sick leave until the effective date of the workforce reduction which will be July 19, 2019.”

“I want to be very clear that it is my responsibility to ensure equal protection to ALL citizens of Knox County, Tennessee under the law, my oath and the United States Constitution without discrimination or hesitation,” Spangler added. “Rest assured that I have and will continue to do so.”

Knox County Mayor Glenn Jacobs told reporters he found Fritts’s remarks to be “extremely vile and reprehensible” and condemned the calls for violence.

WVLT reports the Knox County District Attorney’s office is now investigating the matter, as well as past closed cases handled by Fritts where his anti-gay bias may have played a role in his investigations.