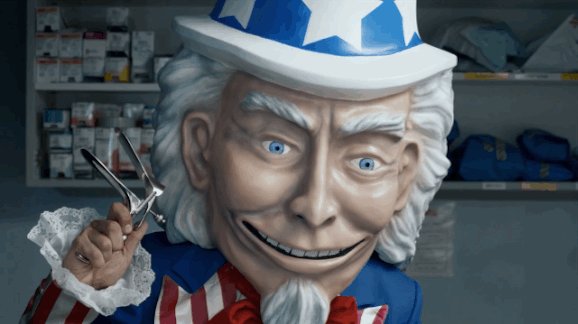 Well, if this doesn’t make the teabaggers look crazy. Now they introduce “Creepy Uncle Sam” giving an exam to a young woman at a OB/GYN exam.  From Yahoo News:

Generation Opportunity, a Virginia-based group that is part of a coalition of right-leaning organizations with financial ties to billionaire businessmen and political activists Charles and David Koch, will launch a six-figure campaign aimed at convincing young people to “opt-out” of the Obamacare exchanges. Later this month, the group will begin a tour of 20 college campuses, where they plan to set up shop alongside pro-Obamacare activists such as Enroll America that are working to sign people up for the insurance exchanges.

Generation Opportunity intends to host events at college football tailgate parties festivals, where “brand ambassadors” (read: hot young people) will pass out beer koozies that read “opt out,” pizza and literature about the health care law. Some events may have impromptu dance parties with DJ’s, complete with games of cornhole and competitions for prizes, organizers said.

Men don’t get off scot-free either. There’s a similar video for men where “Creepy Uncle Sam” shows up to apparently give a prostate exam.

And hard core teabaggers aren’t happy about it either.  Check out the comments on Twitchy.