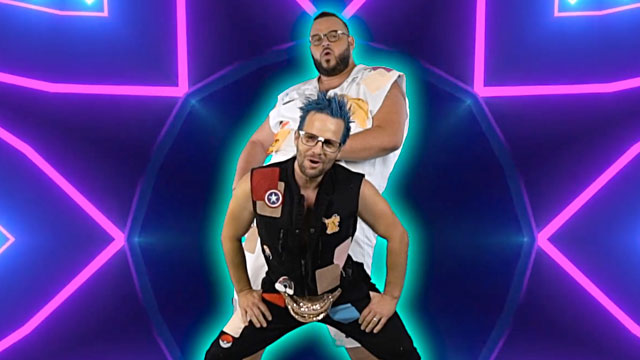 Out singer/songwriter Tom Goss has been extolling the virtues of hirsute plus-sized gay men for years, and now he’s back to celebrate those gay geeks with fuzzy cheeks with ‘Nerdy Bear: The Markaholic Remix.’

The new single and music video revisits Goss’s popular ‘Nerdy Bear’ release from last summer but reinterprets the tune from the bear perspective.

The original track was a pop track with sultry R&B vibes, but the new release (by LA-based producer Markaholic) raises the BPMs and features Mean Girls star Daniel Franzese.

Franzese, one of the gay community’s ultimate ‘nerdy bears,’ says the idea to remix the song was his.

“When Tom’s original came out last summer, I was like ‘OMG, it’s about time we got an anthem of guys pursuing us in song,” says Franzese. “We should do a remix of this track where the bear responds that he’s down to party—and I should rap on it!’”

And that’s exactly what happens as Franzese drops some rhymes that weave sexual connotations with 80s arcade game references.

“If you like whips and chains, we can do the Double Dragon,” referencing the martial arts game. He continues with “I’ll follow you down your Oregon trail and hitch on to your wagon.”

Along the way, the music video touches on the cherries in Pac-Man, shapes from Tetris and the mushrooms in Mario Brothers.

Like Tetris when I’m finished, I dream of your shape for hours
Beat your big boss baby, your Gannon, your bowser
Give your boy a mushroom and I’ll grow like I’m supposed to
Love a Harry pothead, winggarda levioso
Grab a joystick, come get closa, scoot-a cross da-sofa,
Chew and chomp these cherries Pac Man, don’t worry, I won’t ghost ya

The idea behind the music video is to convey the confidence Franzese and others in the gay bear community have built by not only accepting their girth, but embracing it. “It’s fun to find unique ways to amplify body positivity and happiness,” says Franzese.

Plus, Goss brings a few smiles of his own in the video, throwing down his own brand of stripper moves. It’s all big fun with some big beats.

Franzese has collaborated with Goss before having played the singer’s husband in a series of videos from Goss’s album, Territories. “It’s always fun to work with Danny, and at this point it seems like we’re just making up opportunities to work together,” Goss laughs.

Tom Goss was 22 and in seminary, training to be a Catholic priest, when he realized his strong attraction for plus-sized men, known as “bears” in the gay community, and nerdy ones to boot. “‘Nerdy Bear’ is authentic to my experience and relays my unique perspective that beauty doesn’t fit a standard mold,” he says.

‘Nerdy Bear: The Markaholic Remix’ is available on all major digital platforms. 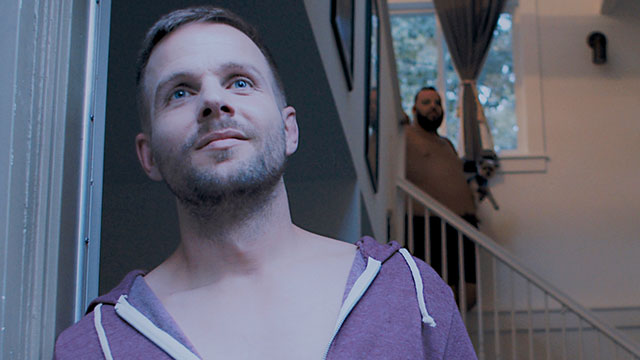 Out singer/songwriter Tom Goss has released the emotional single/music video for “Regretting” from his seventh studio album. Territories.

On the track, neon bass reverberates through “Regretting” as a dreamy chant takes hold.

After walking in on his husband with another lover, Tom and his husband decided to open their marriage, resulting in Tom falling in love with another man, to his husband’s dismay. The next music video in the story, “Regretting” comes full circle with Tom expressing his boundless love for his husband.

The 15-track concept album, produced by Ian Carmichael (Lamb, The Orchids, One Dove) candidly delves into the complications of love.

“At the time, I was going through a really rough patch with my husband,” Goss shared with Gay Times. “I was writing a lot about the struggles we were having and I realized that I wasn’t focusing enough on why I was still in the relationship. I wasn’t honoring what we had built, what was still beautiful, and the potential future I hoped we still would have.”

“‘Regretting’ is ultimately about not regretting. Regardless of how hard things have been, or may be in the future, I won’t live in regret. I will work to remember the wonderful, the beautiful, and the inspirational, regardless of how hard it may be from moment to moment.”

To celebrate Pride Month, Tom is hosting a live stream show every Friday at 8PM PT for the month of June on the GROWLr dating app. The live stream events, titled Friday Night Live, feature the crooner serenading fans with original songs as well as covers.

Goss has earned critical acclaim for Territories, which explores new emotional and musical terrain for the guitar-toting troubadour including a deep dive into electronic synth-pop sonic landscapes.

Throughout the past year-and-a-half of world exploration and self-discovery, Goss found himself in a place that was not his own. Believing that we are more susceptible to emotional growth when we are pushed out of our comfort zone, Territories abandons any facade of safety and dives into the unknown.

Last year, I chatted with Goss at length about the story behind the new album, the new musical direction of the collection, and much more. Hit the play button below to hear Tom Goss share about his new album, Territories.