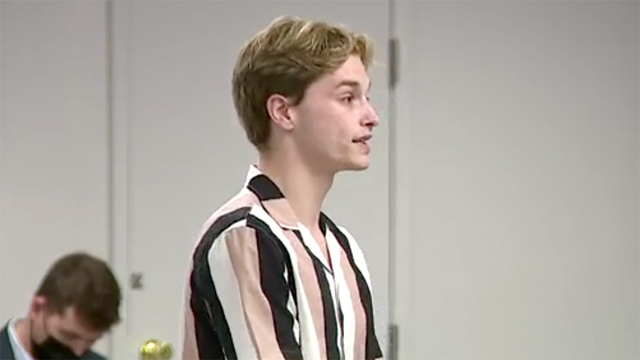 Texas high school senior Trevor Wilkinson was placed on in-school suspension (ISS) on November 30 after he showed up to school wearing nail polish.

Nail polish, it turns out, violates his school’s dress code – but only if you’re male.

According to Wilkinson, who attends Clyde High School in West Texas, he was told he would remain in suspension until he removed the nail polish.

Wilkinson took to Twitter that day to protest writing, “Imagine your school not allowing boys to paint their nails and giving boys iss for it. And the whole administration being okay with it, homophobic and sexist? Welcome to west Texas.”

imagine your school not allowing boys to paint their nails and giving boys iss for it. and the whole administration being okay with it, homophobic and sexist? welcome to west texas🤠

Wilkinson’s story went national after he refused to remove the nail polish and instead launched a Change.org petition demanding that the school policy be changed.

At this writing, over 336,000 people have signed the petition.

“It is a complete double standard because girls are allowed to have any form of nails they want, and honestly they can express themselves in any way they want,” Wilkinson wrote on Change.org. “I am a gay male and I’m beyond proud. This is unjust and not okay.”

Monday night, Wilkinson addressed the school board again asking them to amend the dress code. And yes, he was wearing his nail polish.

He began by noting that the ACLU had sent letters to nearly 400 schools in September about school rules that might be discriminatory. Clyde High School was among those who received a letter.

“With all due respect, there have been two times this issue could have been resolved,” he told the board. “Although frustrating, I know everything is not going to go my way. But this isn’t about me anymore – it’s about a discriminatory, sexist policy that needs to be changed.”

“I got my education taken away from me for something as minor as painting my nails because it’s against the dress code,” he continued. “The question is why? Why is it against dress code for a man to be comfortable with his masculinity and defy the gender norms society has imposed on us?”

Wilkinson also pointed out that making a rule about nail polish only applicable to male students was sexist. “Having a double standard like this only shows that Clyde doesn’t accept kids for who they are.”

He also threw down some equality speak saying, “I understand that you guys have traditional values and I respect that, but to get respect you also have to give it.”

“There’s a certain beauty in uniqueness and nobody should have that taken away. Diversity is what makes this country so beautiful.”

He closed his remarks asking the school board to be “open-minded enough to accept and respect others for who they are.”

Wilkinson addresses the school board at the 2:45 mark in the video footage from local ABC News affiliate KTXS.

But it appears the school district will not be changing its dress code any time soon.

Superintendent Kenny Berry issued a statement which read, in part, “The District will conduct a thorough review of its dress code when it performs its annual review of the Student Handbook.”

There was no mention of when that annual review might take place.

Berry went on to note that, until that time, “the District will assure that no student is treated in a discriminatory or inequitable manner.”