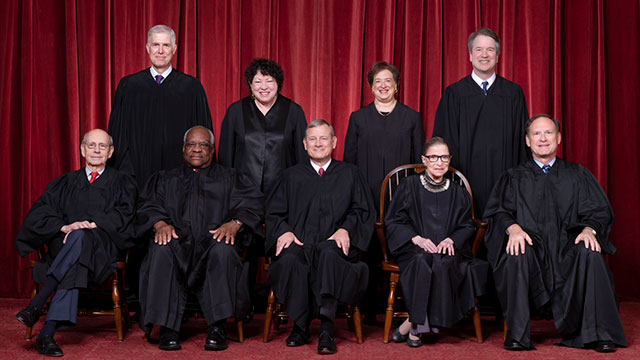 The Supreme Court on Thursday ruled that Manhattan District Attorney Cyrus R. Vance Jr. can see Donald Trump’s taxes and business records, but Congress will have to wait a bit longer.

Vance is investigating whether the Trump Organization falsified business records to conceal hush payments to two women, including pornographic film actress Stormy Daniels, who alleged they had affairs with Trump years ago. Trump has denied those claims.

Vance is seeking Trump’s tax returns, among other records. The president has refused to make them public, unlike previous modern presidents. Because the records are for a grand jury investigation, they would not likely be disclosed before the election.

Separately, three House committees have sought bypass the president to obtain his financial records from his longtime accounting firm, Mazars USA, and financial institutions. The committees, all controlled by Democrats, say they are needed to check Trump’s financial disclosures and inform whether conflict-of-interest laws are tough enough.

In both cases, the justices ruled 7 to 2, with Trump nominees Neil M. Gorsuch and Brett M. Kavanaugh joining the majorities. Justices Clarence Thomas and Samuel A. Alito Jr. dissented.”

The Supreme Court sends case back to Lower Court, arguments to continue. This is all a political prosecution. I won the Mueller Witch Hunt, and others, and now I have to keep fighting in a politically corrupt New York. Not fair to this Presidency or Administration!

Courts in the past have given “broad deference”. BUT NOT ME!

….No Republican Senate Judiciary response, NO “JUSTICE”, NO FBI, NO NOTHING. Major horror show REPORTS on Comey & McCabe, guilty as hell, nothing happens. Catch Obama & Biden cold, nothing. A 3 year, $45,000,000 Mueller HOAX, failed – investigated everything….

….for another President. This is about PROSECUTORIAL MISCONDUCT. We catch the other side SPYING on my campaign, the biggest political crime and scandal in U.S. history, and NOTHING HAPPENS. But despite this, I have done more than any President in history in first 3 1/2 years!