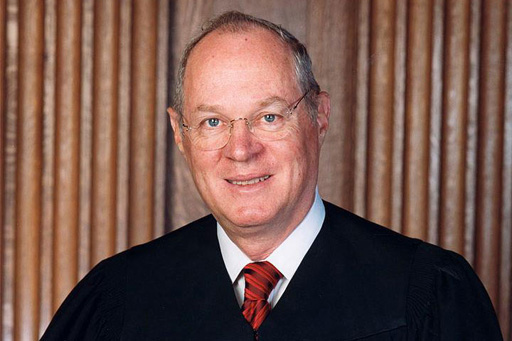 This is very bad news for the LGBTQ community and for the entire country.

“It has been the greatest honor and privilege to serve our nation in the federal judiciary for 43 years, 30 of those years on the Supreme Court,” Kennedy said in a statement.

In his official letter to President Trump, Kennedy said his resignation would be effective July 31.

Kennedy has been the all-important ‘swing vote’ for years now.

Tom Goldstein, a Washington lawyer who argues frequently before the court and publishes the SCOTUSblog web site, told NBC News, “Justice Kennedy was the most important member of the court in a century, maybe ever.’

Appointed by President Ronald Reagan, Kennedy is responsible for many important rulings in favor of the LGBTQ community:

• He authored the court’s opinion for the 1996 ruling in Romer v. Evans, which reversed a provision in the Colorado Constitution denying homosexuals the right to bring local discrimination claims.

• In 2003, he wrote the Court’s opinion in Lawrence v. Texas, which invalidated anti-sodomy laws on the basis of the Due Process Clause of the United States Constitution

• On June 26, 2013, the Court ruled Section 3 of the hideous Defense of Marriage Act was unconstitutional in United States v. Windsor. That decision required the federal government to recognize all legal marriages. The majority opinion, penned by Kennedy, read in part, “The federal statute is invalid, for no legitimate purpose overcomes the purpose and effect to disparage and injure those whom the State, by its marriage laws, sought to protect in personhood and dignity. By seeking to displace this protection and treating those persons as living in marriages less respected than others, the federal statute is in violation of the Fifth Amendment.”

• On June 26, 2015, Kennedy authored the majority ruling in Obergefell v. Hodges, which made marriage equality legal in every state of the country.

But there were times when Kennedy was not our friend as well:

• In 2010, he voted with the other conservative justices in Citizens United v. FEC which allowed Super PACS to make enormous donations to political campaigns.

• More recently, he authored the 7-2 Masterpiece Cakeshop ruling which found Colorado baker Jack Phillips didn’t get a fair shake when he was fined for refusing to sell a wedding cake to a same-sex couple.

The vacancy gives Donald Trump another chance to turn the nine-member court even more conservative after the addition of Justice Gorsuch last year.

With five solid conservatives justices on the court, SCOTUS could repeal or limit gay rights, repeal the right to abortion, and more.

“Justice Kennedy had been saying privately that he was considering retirement… This gives Pres. Trump his 2nd nomination, & with Republicans in control of the Senate, a chance to turn the Supreme Court to the right for a generation,” @JanCBS reports https://t.co/2qLebqsuKo pic.twitter.com/X1njzmU79Y